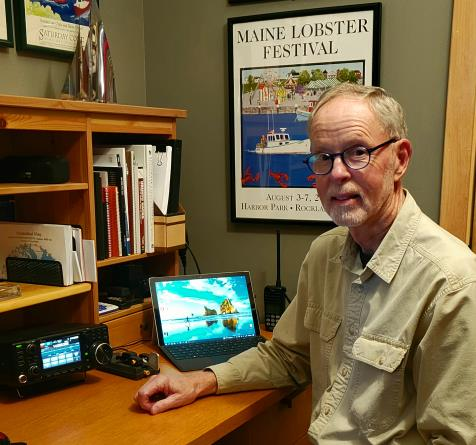 Ham radio began for me in 1959 at the age of 15. I had been a shortwave listener since age 13 and was introduced to Morse code as a Boy Scout activity. My first ham license was KN1JIQ in Portsmouth, Rhode Island. I was on the air at 5 wpm with an Ameco Ac-1t transmitter kit, a Hallicrafters S38e receiver and a long wire antenna across my back yard from house to shed.

We were a Navy family and moved a number of times over the next decade resulting in call signs KN4FRR, K4FRR, K1TUC and WB1HGK. During that decade ham radio took a back seat in my life. I attended college, married my high school sweetheart, became a father to a daughter and son, attained my PhD and enjoyed a 38 year career as a Professor of Special Education, Associate Dean, and Director of Research at the University of Maine. At retirement in 2011 I upgraded my current license to Extra as KA1NP.

My wife and I now spend spring, summer and fall in Belfast, Maine where we cruise on Penobscot Bay, one of the most beautiful cruising areas in the world. In Belfast my home station is an Icom-7300 with an end fed dipole. I belong to the Waldo County Amateur Radio Association which is closely aligned with the county Emergency Management Agency. This year I had great fun as one of two CW operators for the club’s Field Day.

Winters are now spent in Tampa, Florida where we enjoy the warmth along with family and friends. My Icom 7300 and end fed dipole transport easily and this antenna is, so far, almost undetectable in a restricted community. In Tampa I belong to the Tampa Amateur Radio Club and enjoy the camaraderie of this group and the diversity of ham radio interests and resources including remote HF operation and satellite communication.

CW has been a constant interest since my Novice days. For many years I wanted very much to improve my speed and skills. In retirement I found the CW Academy and began with the Intermediate course. This was followed by the Advanced course which I repeated once. Thanks to Joe, KK5NA, Bruce, K8UDH and the mutual support of classmates my sending speed and head copy improved immensely. I look forward to continued improvement with more time spent on the air. I am also committed to assisting others who express interest in learning cw and developing their skills.