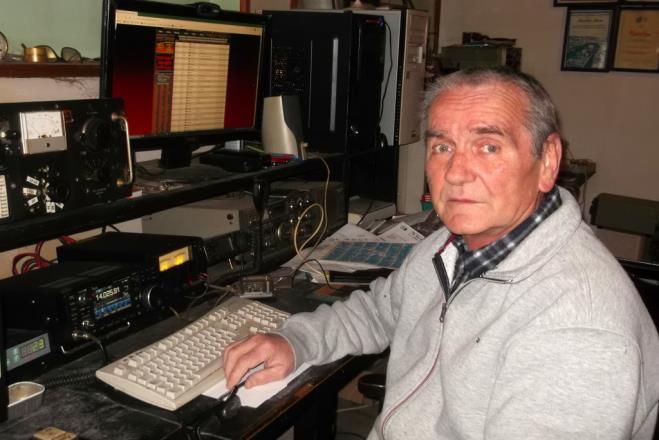 I was born October1949 in Slavonski Brod, Croatia. Married, two children and three grandchildren, everyone lives and works in England. I currently live with my wife at my house in Lipik.

From 1958 to 1987 year I lived in Brčko (Bosnia and Herzegovina) where I graduated from the School of Radio and TV Mechanics (1969 year). That’s where I started radioamateur in May 1965 at the radio club YU4CFG (now E77CFG). There I passed all the categories for the amateur telegraphist (C,B and A class), and got the call sign YU4VOY and later YU4YA. In 1971 year, I got a job with the Brčko police. Completed retraining of interest in radiotelegraphy-teleprinter-code and as such formed a police liaison center, and a radio club section YU4ERO.

In 1987 year I went to Zagreb and was employed there by the ex-Yugoslav Army in the field of electronic reconnaissance and anti-electronic operation (EIPED). In Zagreb I get a new sign YU2AJ (later 9A2AJ) and I am a member of the radio club YU2BQR. I am one of the organizers of founding the first Croatian Competition Club (9A1A), and the first Croatian CW Club (9A-CW-G).

During the war of 1991 year, I volunteered to report to the Croatian Army at the radio control center at the headquarters (monitoring the ex-YU Army’s liaison system). 1992 I organize people (HAM) and technique on the Corridor of Brčko to monitor and distrupt ex-YU army connections.

1993 I am the first activator from Neum, a newly recognized new DXCC country Bosnia and Herzegovina – T93T. Until 1995 worked as an active duty sergeant in the Croatian Army in the training of midfielder and the formation of a command center liaison for the General Staff of the Croatian Army.

In 1995 I left the army, retired and moved to Lipik. I recently set up a radio club in Poljana (near Lipik) with a group of amateurs, where we will train everyone interested, especially children, in electronic construction, digital engineering and of course telegraphy.

Since I have confirmed all DXCC countries 354-mix (Honor roll #1) 351-CW (only P5 SSB) and 298 at 160 m (for now), now I’m only interested in competitions-CW, antenna construction, fishing and a little philately.