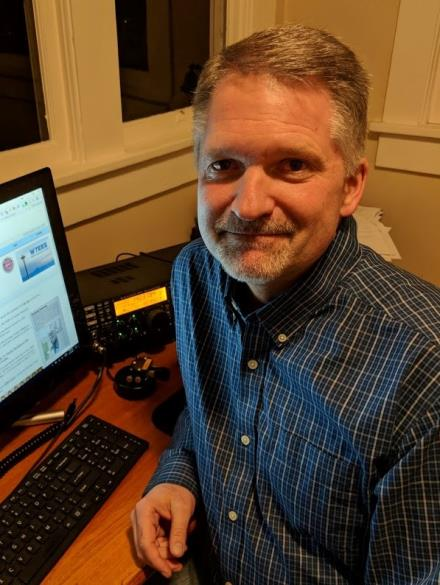 I am thrilled to be a member of CWops, and I thank my CWops instructors, my fellow students and my sponsors. It is an honor to be a part of this organization.

After over 30 years in the hobby, I am still thrilled to hear the sound of my call sign coming back to me — whether it is from the other side of the world or from a ham just down the street.  I know enough about how it works from a science and technology standpoint but still feel like sending radio waves through the air and getting a response is magic.

As a kid, I played with walkie talkies, built a Radio Shack crystal kit, and listened to far-off AM broadcast stations and Cold War-era Soviet propaganda on the shortwave bands. Finally, I realized that it made no sense that I was not yet a ham radio operator, so I taught myself Morse Code at 5 words per minute and passed the written and code tests to become a Novice in 1985.  I went on to pass the written Technician and General code tests the next year, passed the Advanced test in the 1990s and finally became a no-code Extra in 2012.

But it wasn’t until 2014 that I realized how much fun it could be to send and receive Morse Code. I appreciate that its beauty is in its simplicity: It is the original digital mode, reducing words and ideas into on and off sounds that can be sent with a homebrew QRP rig and a piece of wire.

It took a year for me to re-learn Morse Code well enough to get on the air at 8 words per minute and two more years to pass the three levels of CW Academy.  Along the way, I made new friends, learned a lot about Morse Code, ham radio and myself, and discovered a passion for contesting that I never knew I had.

I am thankful and feel privileged to be a part of the group.