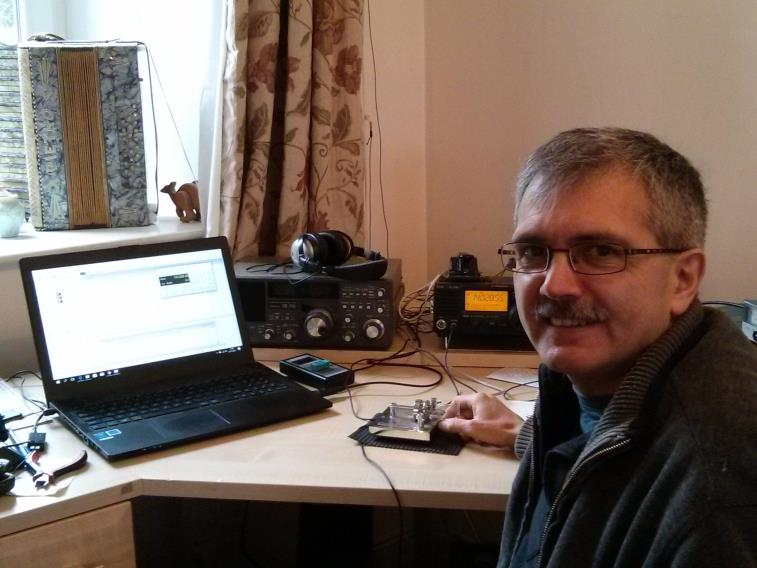 I am extremely proud to be one of the newest members of CWops. Thanks to Stew, Keith and Jerry for advising me through the three levels of CW Academy over the last year and thanks to those who sponsored me to become a member.

I live near Duns in the Scottish Borders with my wife, Kathy, and two dogs, Dillon and Kitchi. They are rescue dogs, both ex-racing greyhounds.

I’ve been interested in radio for as long as I can remember. My Dad was a keen home-brewer, though he wasn’t a ham, and there were bits and pieces around that he had made and boxes of old components in the attic. Including loads of valves and big variable capacitors that I wish I’d kept! We travelled the world with him, building hydro-electric power stations, and we had a big multi-band short wave radio to keep track of what was happening at home by listening to the BBC World Service and Voice of America. It was then that I became aware of ham radio but because I didn’t know about side-band I didn’t understand why the radio wouldn’t tune them properly and why I couldn’t understand what they were saying!

I was first licensed in 1981 as G6DPD and passed my Morse test (12 wpm) in 1986 to get my class A license: G0EUL. I was active for about a year after that, mostly HF CW. Then left university in Leicester and moved to Oxford, then Cambridge, then Edinburgh and finally to Duns in the Scottish borders and was off the air for almost 30 years until late 2016 when I re-activated my license and I’m now QRV again as GM0EUL.

I love CW and I operate almost 100% CW but after 30 years of inactivity it had gone almost completely, I couldn’t even remember all the alphabet! Thanks to the CW Academy my CW is better than it has ever been but it’s a lifelong learning experience and there’s still plenty of room for improvement! I like making things, working dx when I can and working new countries, I dabble in contests, I’m not a contester but I find them addictive once I sit down at the radio for “half an hour or so”! I’m also a member of the GQRP club (#15056) and SKCC (#16307).

Workwise, I’m a life-science entrepreneur. I have a PhD in molecular biology and I was a university research scientist in Oxford, Cambridge and Edinburgh. I left academia in 1999 and have since been involved in technical and commercial roles with a number of biotech and medtech start-ups.

My other interests include Land Rovers (got a 1957 Series 1 and a 101 Forward Control- for those who are interested), motorcycles (got 4 – probably too many; I’m a member of the Lothian and Borders Classic and Vintage Motorcycle Club), I play guitar and mandolin and I’m a member of the Vestry at Christchurch Scottish Episcopal Church in Duns.

I hope to work many of you on the air and to meet a few of you in person over the years to come. Many thanks for welcoming me into CWops.