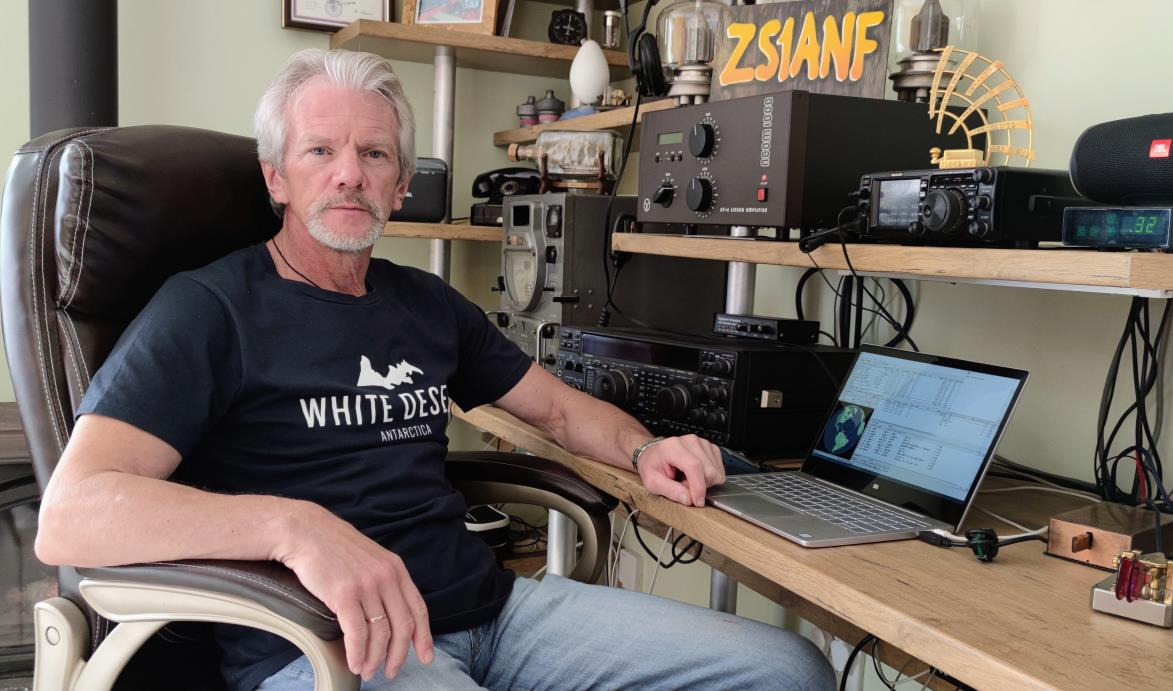 I was born in 1961 in Arkhangelsk, on the coast of White Sea, Russia. I graduated from College of Communications in 1981, where I received knowledge in radio engineering and HF equipment. I learned Morse while serving in the Soviet army. After the army, I decided to continue to improve Morse and went to work to radio centre of the Northern Shipping Company in Arkhangelsk. At that time, the shipping company had more than 150 ships and there was a lot of work on the radio. The teletype had just appeared then, and all the traffic was moving mainly in Morse code. At that time I was still far from amateur radio.

Then dream to go to Antarctica came to my mind. At that time it was not so easy to reach Ice continent. You had to first work in the Arctic, prove yourself well, and only after that you could be taken to Antarctic Expedition. And so, having decided to follow my dream in 1984, I left for Amderma, a small village on the coast of the Kara Sea. Job was the same – radio operator at Meteorological centre. In Amderma I met the guys from club station RZ1PWA, Sergey UA1PAO, Nick UA1PAU, Slava UA1PAI. Since this all started…. A year later I’ve got my first UA1PBA call sign. Soviet radio stations over the Polar circle were very popular and we always had a huge pile up.

Arctica was done, but I wanted to go to Antarctica. It happened in 1989, when I was accepted as radio operator of Bellingshausen Station (4K1F). After the expedition, in Amderma, I got bored to be just radio operator and moved to “Radio equipment repair and installation” department. This gave me opportunity to visit many polar stations on the Arctic islands and on the coast of Kara Sea. And although I really liked it, Antarctica called me again, this time to Novolazarevskaya station – 4K1D (1992-1994) This long overwintering was followed by two Antarctic seasons at Novolazarevskaya 1994, 1995 and Bellingshausen in 1996.

In 1998, I left for Bellingshausen (R1ANF) again as head of overwintering team. This overwintering changed into a season, then to overwintering again, and again until 2007. All these years, R1ANF was on the air not only from Bellingshausen, but also from neighbor stations, refuges and field camps (R1ANF/A, R1ANF/P, CE9/R1ANF, DP1ANF, KL8KSJ ….)

In 2007 I moved to ALCI based in Cape Town and got call sign ZS1ANF. At the same time, I’ve received R1ANR for Novolazarevskaya Runway. In 2012 I returned to Bellingshausen (RI1ANF), where during the winter we made more than 44K QSOs including more than 2K on Top Band together with my friend Slava RD3MX (ex UA1PAI).

In addition to Antarctic activations, together with my friends: RN1ON Alex, UA1OZ Yuri, UAOJL Aleksandr, every summer we organize expeditions to the islands and lighthouses in the White Sea – RK1O/p, RI1OM, RI1ON.

What else? I don’t work SSB and digital modes. I’m not diplomas hunter. I like to give others the opportunity to work out with rare territory and I love CW pile up. I’m have Yaesu radios and SteppIR antennas. And I’m happy with Elena, my wife who always support me in my amateur radio business.

Thanks to Raoul, ZS1C for nominating me to CWops and my sponsors. See you on air!