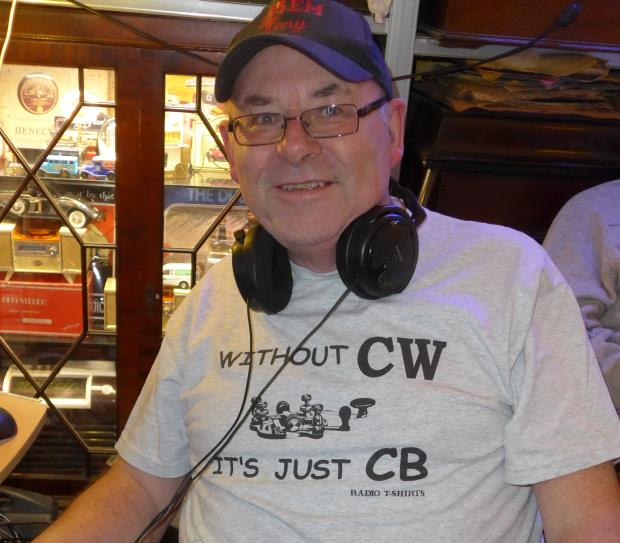 It was my father (1910-2003) who introduced me to radio. He was an SWL and I have fond memories of listening to distant BC stations with him on his Belmont radio. In 1966, Dad helped me build my first homebrew project, a one valve/tube regen RX with green Denco plug-in coils.

When I started work as a telephone technician, I bought a Yaesu FRG7 receiver and through that was introduced to the CB craze of the 1970s. I subsequently bought an FT101ZD transceiver and swapped the 10 m xtals for 11 m ones. In 1979, I began studying for the amateur theory examination and received my “B” callsign, EI6AEB in 1980. To gain access to the HF bands, I passed the 12 wpm Morse test the following year and received my EI5EM “A” callsign. Back then, EIs were confined to CW only on 20m and 40m, with a maximum power of 25 watts for their initial 12 months.

Many just sat out the year until they were granted phone facilities, all HF bands and higher output power. At the time, I had no great interest in CW, but as I had the equipment, I decided to give it a try. After a short time I realised how much I was enjoying the mode. When the year expired and I could operate on phone, I still found myself reverting to CW again and again. For me, HF has meant CW ever since.

I also became interested in QRP and homebrewing and this has continued to this day. I maintain a YouTube channel of short videos of my many projects. I also write articles for some of the amateur publications. In recent years, I have developed an interest in SOTA activations.

I am the licencee for the club station in the vintage radio museum near Dublin, EI0MAR. Lee de Forest in 1903, and the Marconi Company in 1905 conducted wireless telegraphy experiments from the Martello tower housing the museum. I feel very privileged to be operating CW from this historic location. When Jim, N3JT was in Ireland recently, he visited and operated from the museum club station. He twisted my arm to join CWops, and here I am.