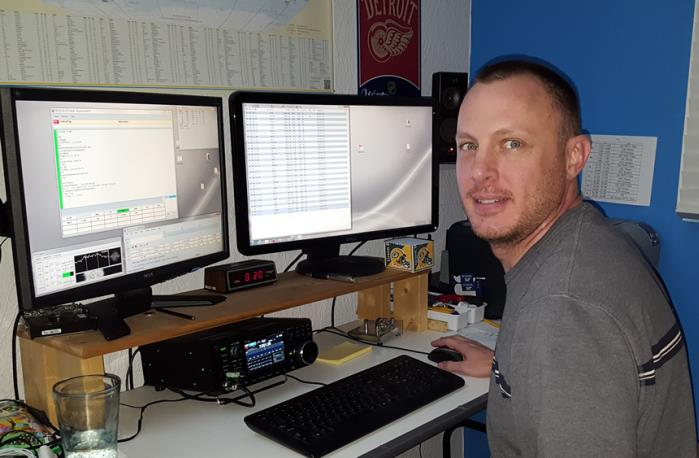 I used to spend evenings in the cold dark corners of our basement, watching my dad operate his radio. It took some time before I learned CW and could somewhat follow what he was sending and receiving, but it came to me eventually. I learned it relatively easily but going fast enough to keep up with him took time. I still had lots of fun doing it. I hadn’t quite taken an interest in radio at this point, but I still sat there and listened and watched. Around age 10 I finally started to take an actual interest, but not enough to get my license until the summer of 1988 at age 12. In July I passed my Novice test and was issued my first call of KB9BIB.

I spent quite a bit of time on the air, but as a 12-year-old kid, I quickly discovered that I had very little in common with people on the radio, and got very tired of talking about my radio and antenna. This led me down a path to contesting. I immediately fell in love with it. I entered just about any contest I could. The only big one I didn’t get in was Sweepstakes CW, as that was dad’s contest.

In between contests I filled the time working DX, at the height of cycle 22, this was quite productive even in the Novice bands.

I upgraded to Technician and then quickly General to get more privileges for contests. I upgraded to Advanced class before becoming distracted in my later high school years. After moving away after school, I lived in an HOA neighborhood, so an antenna wasn’t an option. I kept my license active the entire 23 years I was away from the hobby. I always wanted to get back into it.

When I returned to Illinois, I bought a single-family home without an HOA, but it still took a few years to get back into radio. I eventually did in the fall of 2016 and became extremely active once again. I completed the journey to Extra class, at which time I changed calls from KB9BIB to ND9G.

I still contest and DX, belonging to several clubs of those varieties (SMC, NIDXA), I am a life member of the ARRL, and do what I can to encourage hams to operate, regardless of their mode or station capabilities. I am an active member in my local general interest club (McHenry County Wireless Association), currently in the role of Vice President.

When I’m not operating or working, I spend time with my wife and young daughter, who has taken an interest in listening to CW pileups. Once she can start to spell words, I’ll start teaching her CW, she’s just turning 3, so we have lots of time.

Thank you to Joe KK5NA for nominating me and the additional sponsors who paved the way for me to join your ranks.