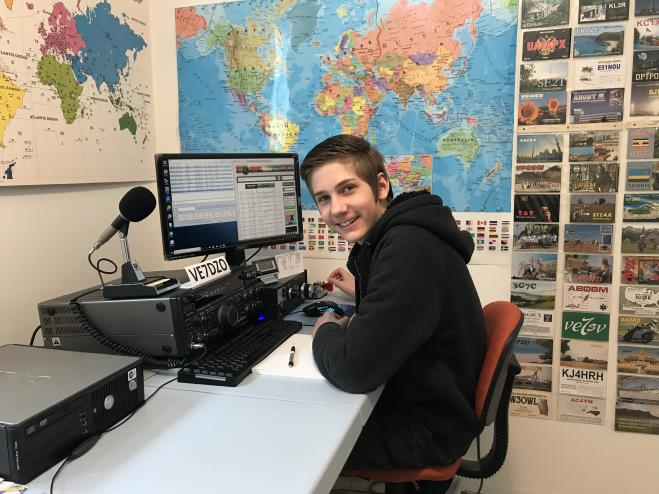 I was licensed in late December 2017 and I have been active since January 2018. Currently I am 14 years old and an avid CW operator. I enjoy contesting, DXing and the social aspect of ham radio. My QTH is about 1000km North of the US border, just north of a town called Prince George.

As I have only been licensed for a few months, I don’t have much of a story yet in amateur radio. Although I have been involved in radio since I was very young. At our old QTH in Kelowna, BC my father (VE7KY) had a 50-ft tower with a Mosley CL-36 on it and I did participate in a few contests using his callsign. I really enjoyed it, although I was just too young to realize the potential in amateur radio. That was it, until I got my license. After that everything took off! I have worked over 150 DXCC entities, made over 5000 QSOs, was a team member in the 2018 Youth DX Adventure to Curacao (PJ2Y), participated in most major contests and have learned CW at 50 wpm plus. All in a matter of a few months. So that just about brings us back to current day.

My main goals in ham radio are, to participate in WRTC, be a team member on at least one major DXpedition and to make life-long friends on the way!

I would like to thank my good friend and my biggest inspiration, Dale VE7SV. I learned lots from him, any time I need encouragement I think of him and what he has accomplished. Anything can be done! Thank you, Dale!

A huge thank you goes out to Bryant, KG5HVO for introducing me to the CWops CWTs. As well as Larry, NN5O for nominating me to be a CWops member and all my sponsors.

Hope to work you in the coming contests!