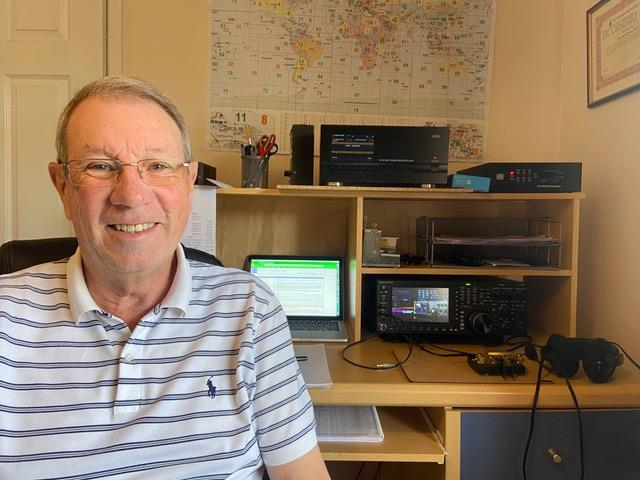 Firstly, thanks to Glynn (GW4MVA) for nominating me for membership.

It all started for me during occasional visits to my late Grandfather in Leeds, Yorkshire, England. This was during the late 1950s. Harold was an ex Royal Navy telegraphist, and he’d tune his old commercial radio to find a few bits of Morse code which he’d ‘decode’ for me. So, I started to learn it. But slowly. Fast forward to the 1960s, and by then I’m in the Royal Air Force, as a (you guessed it) Telegraphist. At the end of 18 months training I was competent at 25 – 30wpm. But it wasn’t until some years later (1979), when I’d swapped jobs from the RAF to the Civil Service, that I obtained my license.

My first rig was a TenTec Century 21, CW only, solid state transceiver that got me underway along with my home-brew 20 m dipole. That soon led to a G5RV antenna plus a Kenwood TS530s. My background in CW meant that’s what I enjoyed doing most, both ragchewing and contesting.

But then, after a house move from Taunton to Cheltenham in 1990, amateur radio took a back seat, and I pretty much gave the hobby up. It wasn’t until 2015, and after chatting to a couple of my golfing buddies who were going to take their license exams, that I found the spirit of amateur radio awakening again. I was able to resurrect my original callsign of G4IZZ and was active once more. I really shouldn’t have left it for so long – I hadn’t realised how much I’d missed the hobby. The station now comprises a TS890s, ACOM Amplifier and LDG Tuner. The antenna is an End Fed long wire.

I’m delighted to have been nominated and sponsored to be a member of CWops, and I look forward to meeting many like-minded souls on the air.