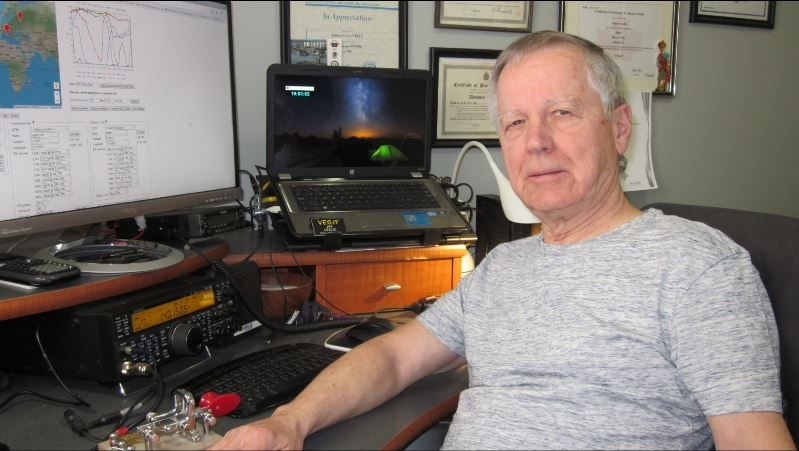 My ham career started back in 1963 when I visited my friend John’s shack. While showing me his station he made a contact on CW. That was my very first introduction to amateur radio and I was instantly hooked. I set out on a mission to get my license as quickly as possible. After buying both the 1963 ARRL Handbook and the Radio Amateur Licensing Handbook by Jim Kitchin for the Canadian radio regulations, I started studying. I was in high school with no knowledge whatsoever of anything to do with RF or CW but began to self-study since no classes were available to me back then. With some summer job money and support from my parents I purchased an old surplus RPA-3 receiver and did a lot of listening. I did this for a few months and taught myself enough theory and CW to 10 WPM to pass my basic exam on October 23rd 1964 on the first try. I became VE2AQI a few weeks later.

I had no transmitter yet so I built a crystal controlled one for 80M using a single 6V6 built on a cake pan my mother donated to the cause. It worked and I made my very first CW QSO with John on November 3rd, 1964. Then later, with a year of CW experience behind me, I wrote and passed my advanced exam at 15WPM – also on the first attempt. Exams were all written but after that I made the lucky decision to only write down call signs in the log and did head copy ever since which served me well in later years. About a year later I graduated to a Heathkit DX-40 and VF1 VFO and felt liberated from being rockbound. My operating was 99% CW though I do admit I tried AM a few times which was a privilege of my advanced ticket. I did a lot of QTX and earned the ARRL CW “Rag Chewers” certificate. I still have all the old logbooks and lots of QSL’s in the drawer from those days including a prized one from a master CW op some OT’s may remember, Katashi Nose, KH6IJ, in 1965. In the 70’s I purchased an FT101E and tried some SSB for a while. It just didn’t work for me and after a couple of months I bought a crystal filter for that radio and I was back on CW for many years after that.

Intense business travel, family matters and moving across country had me QRT for far too many years but radio was apparently part of my DNA so I came back and aside from a bit of speed loss which is very quickly returning, I feel like I never left. The radio was upgraded to a Kenwood TS-590SG which I operate barefoot. I enjoy the Mini-CWTs each Wednesday and try my best to operate in all of them. Inspired by Katashi Nose, I also have a personal goal for QRQ. Currently I’m having some short term antenna and operating time restrictions but I count on the CWTs, sporadic DXing and of course Field Day. I also enjoy building QRP gear which keeps me busy during the current sunspot cycle and the propagation conditions out here in Western Canada. Now in retirement, I enjoy this mode as much as I did as a teenager. I feel honored to be a part of this group that respects CW as much as I do. Thanks for having me!