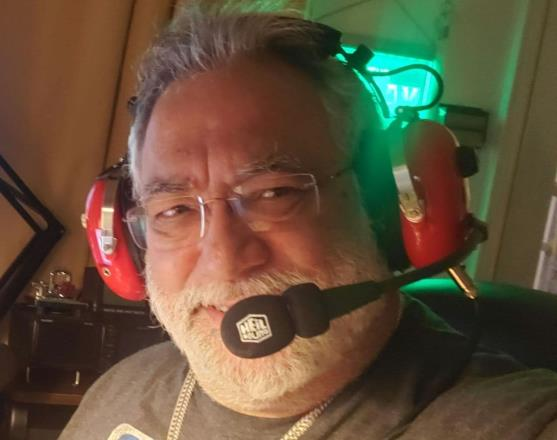 Let me get the personals out of the way. Born in New Jersey, I lived in Ecuador for five years, three in Virginia, and finally in the Los Angeles area since 1968 where I call home to this day. In the following years, I spent 22 years and 11 days in the Air Force and the Army National guard, eventually retiring as a Captain of Artillery in 1996. I’ve worked for 27 years at American Honda, I am sixty-five years old and speak three languages: the Spanish language, the English language, and foul language…22 years in the military can round out an education!

However, I am not even a three-year-old ham. A friend of mine, Dale KF6SBD, set me on the path to hamdom to better communicate while volunteering in the San Gabriel Mountains Off-Highway Vehicle area; I loved going there in my Jeep, Betelgeuse. In July of 2019 I received my Technician’s license. I was now KN6DDU, and I could not even say it. Still in study mode, I got my General license about three months later. Continuing to study, I received my Amateur extra ticket on January 8, 2020.

In September of 2019 I got my vanity callsign, W1SAV. The “W” is for my first name, and “SAV” is for my nickname. I go by Savi, as my friends in the Air Force got tired of calling me son-of-a-bitch, a play on my last name. They gave me the nickname “Savi” in August of 1974, and it stuck. Some friends and family also call me “Sav”. The only call area that could manage that combination of letters in a callsign was 1-Land, ensuing confusion and questions since.

I am a Yaesu man, for no other reason that the first radios I bought: the FTM-400 and the FT-70D and C4FM. I then bought an FT-991A, then I upgraded my HT to the FT3D. To play at the park I got an FT891 and used it with success. Then one day I ended up on the CW portion of the bands and I was intrigued. A ham buddy on UHF suggested I contact Kate, K6HTN, and ask about learning Morse code. I still resisted, then…CWA happened, and Kate answered.

I must say that CW Academy was quite a ride. I still cannot believe all this is free, and it is simply due to the altruism and dedication of the staff, the assistant advisors, and the advisors themselves. In my case Bill Leahy, K0MP was my beginner advisor and Buz Tarlow, AC6AC dealt with me the rest of the time. There should be a special award given to him just for that! I cannot but stop and mention the folks who supported this operation for the last year and a half of my tenure in CWA. The back end must be pretty stressing managing all the students, changes, requests, and advisors each semester. I’ve seen numbers, I’ve heard tales, and my hat is off to Kate Hutton, K6HTN; Joe Fischer, AA8TA and their staff if any.

Back to Buzz. He mentors rather than teaches. He balances well the spinning plates of levity, whip-cracking, direction, and kindness. Buzz suggested we get together in study groups to help each other progress in our skills and after intermediate we did that. We now have an “after-party” after every class session. We became telegraphy nerds because of Buzz’s mentoring. On top of that he continues developing a new crop of assistant advisors; Rich Girardin, N4DPM; Carol Cassell, K6NF; Paula Cole, K7PKA and Gwen Hayden; K6GRH to name only the ones with whom I am familiar. Thank you, Buzz, for what you did for our class, and for me. My journey down this path is just starting.

Now, being from La-la Land, having lived in Hollywood, I cannot finish without saying: I would like to thank the Academy….