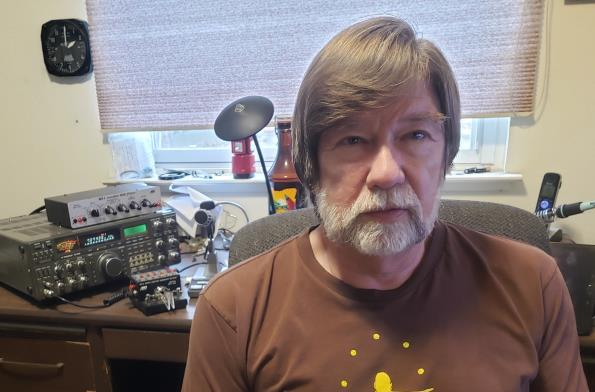 First, I would like to thank Jim N7US for the nomination and talking me into accepting. And, Jim N3JT, Mike K5UV and Hank W6SX for being my sponsors. Also Mike, AA6MK for originally offering to nominate me (I declined because I didn’t think my CW was good enough). Also, John KE6PID for loaning me the Kenwood TS-940 and Al WT6k for talking me into trying CW and helping me with N1MM.

I am a retired software developer. I’ve worked on software debuggers for IBM assembler, COBOL, PL1 and C. I then worked on the COBOL compiler and runtime at IBM on mainframe, AIX and windows. I also worked on XML parse and generate for COBOL and PL1.

I live in Castro Valley, California with my wife, Lynnette KF6NEA. I have 2 grown stepdaughters. I was born in Longview Texas in 1952. My family moved to Kansas, Maine, Michigan then settled in California in 1961.

I took an electronics class in high school, which included learning Morse code. That led to me getting my first license as a Novice WN6FUJ in 1967 but that expired in 2 years and was not renewable. I briefly had a CB license in the early ’80s but that didn’t seem all that great to me.

The 1989 Loma Prieta earthquake (6.9) here in California, inspired me to get back into ham radio. I suffered no damage but I was cut off from my family for several hours. I was licensed as KC6OGJ in Sept of 1990 and as Extra AB6BR in April 1991. Initially, I was doing ATV, packet and VHF/UHF. I had an ICOM 751 but didn’t use it for much.

I have been involved in emergency services and currently support a half dozen public service events annually. I am currently the ham radio coordinator for the Primavera Bicycle event in April.

I have QSL cards for a couple of Space Shuttle missions and the MIR space station. I also enjoy monthly transmitter hunts .I was a member of the NorCal QRP club and built the NorCal 40 m CW and 20 m SSB radios designed by N6KR before Elecraft. I also built my first doppler DF for transmitter hunting and 2 antenna tuners.

With the advent of COVID I started playing more with HF. John KE6PID loaned me the Kenwood TS-940SAT. Al WT6K talked me thru installing and using N1MM for the K1USN SST and I was hooked on CW again. A few months later I started the noon time CWT. I’ve recently purchased an ICOM 7300.

My other hobbies include juggling, unicycling, bicycling, astronomy, archery and table tennis. I am also a licensed IFR pilot; I’m not current but I do still fly occasionally with friends and participate in the Hayward Air Rally.