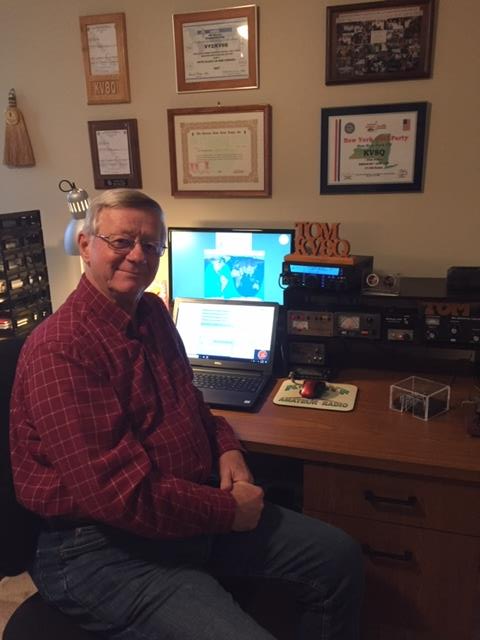 I arrived home from school as a 14-year-old kid on December 7, 1961 and found an envelope for me from the FCC that contained my first ham license issuing the callsign of KN3SBF. I gulped down my supper to get downstairs to my ham shack which consisted of a Heathkit AR-3 receiver and a homebrew rig with an 807 for a final. I built the receiver earlier that year and used it to learn CW. My mom’s clothesline served as my initial antenna and I called CQ quite a few times (logging each one) with no success. I finally called a friend on the phone, Frank, K3QJE, and he gave me my first contact, quite a thrill for me even if he was only a few blocks from my house. That started quite a ham career. The AR-3 was replaced by an S-85 which was replaced by a SX-110. The homebrew transmitter evolved into a DX-100B, the antenna became a 3 element 15 meter beam, etc. I was off and running enjoying my hamming when I wasn’t doing homework. I joined the Navy between my Junior and Senior year in high school and the started out as an E-4 because of my ham license. The Navy made me a Communications Technician, R Branch, and sent me to school in Pensacola, FL where I operated the WA4ECY station. From there I went to Puerto Rico and used the club station, KP4BFF running tons of phone patches for the other naval personnel. That got me tired of SSB and I’ve been a CW operator ever since. My job in the Navy was just like operating a CW contest and that’s where you will likely find me today.

After leaving the Navy, I went to Wisconsin, got married and began raising a family that included three children. I got to play Field Day up there but there wasn’t much time to do much other operating. I ended up in the center of Ohio and, as the kids got older, I got to spend more time on the air.

I moved up to in Delaware, OH and got involved in CW traffic nets serving as NCS for the Early Bird Net working with some pretty big traffic handlers back in the day, W3CUL, W3VR, WA4JDH, WD4COL, W1EOF, etc. I always took the contest weekends off to be in those events. The DX events helped me confirm almost 300 countries on CW. Working with the Red Cross and the folks at the 911 Center got me appointed as the Emergency Coordinator for Delaware County and a 2 meter KV8Q station was installed in the 911 Center.

I currently live in Powell, OH in a condo that was the result of our downsizing. The current antenna is a mag loop that works on 40, 20 and 15 meters. It is hidden in the attic over the garage and it is about 12’ above the garage floor. I have plans for an 80 meter antenna to also be hidden in the attic and a ten meter antenna that will reside in the ham shack. The radio is a TenTec Eagle running 100 watts. I’m sure this setup won’t work as well as the setups that I have had in the past but, at least, I’ll be able to operate on CW from 80 through 10 meters.

My main love is CW contests. I’ve been active in state QSO parties getting plaques from OH, NY, TX, OK, MS, TN, PA, GA and WI. I’ve also received hardware from the 7QP and the Stew Perry events. As I made my way through the domestic contests, I began tracking my confirmed counties. The state QSO parties really helps that effort and I have about 700 more to get – all CW, of course. You’ll hear me in there.

I have recently been operating Field Day with Bill, K8BTU. We setup a temporary 40’ mast and hang a couple of dipoles off of it. One built for 80, 20, and 10 meters which ends up like an inverted V. The other one is a 40 meter dipole also used on 15 meters which ends up as a sloper. Bill does the 80, 20, and 10 meter work and I do the other two bands. We use CW almost exclusively but have gone to SSB when the CW rates dry up. We have done quite well in the 2B2 category recently and hope to continue that pattern.

I am thrilled to join the CWOps organization. Special thanks to Mike, K4RUM, for the nomination. The Wednesday event at 1900 fits my schedule and I find it a bunch of fun operating. You will continue to find me in those hour-long events. My 57 years pounding the brass has brought me more wonderful friends than one can imagine. Thanks to folks like yourselves for making that happen.