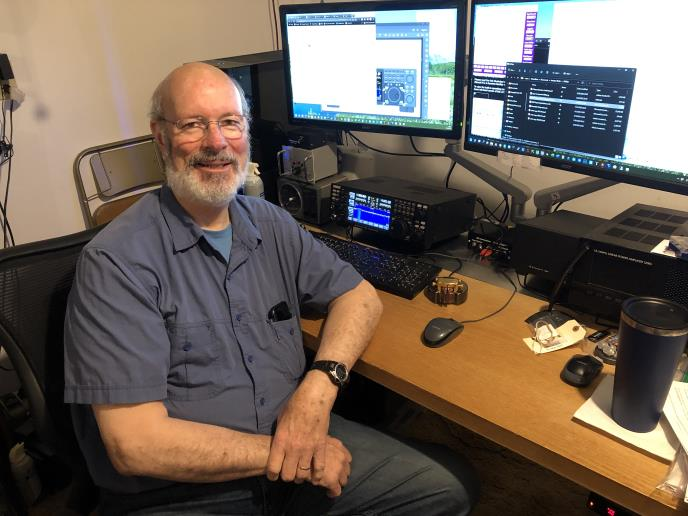 Thank you to the CWops members who nominated and sponsored me (Jim, N7US, Bob, K6RB, Jim, N3JT, Pete, N5KD/G4DVP, and Dave, VE5UO), and to the CW Academy advisors who provided such excellent training (Mark, K5GQ, Bruce, K9OZ, and Ken, KD2KW).

I grew up in Tyler in northeast Texas and got into ham radio through my high school amateur radio club, having previously learned Morse code in Boy Scouts. I had a great Elmer, John, W5CUD, the teacher who sponsored the club. We learned a lot, did Field Day every year, provided radio support for the East Texas area’s March of Dimes telethon, got into RTTY, RACES, and 2-meter FM, and played with laser technology. This was exciting during a time when the space race to the Moon highlighted the importance of science and engineering. I acquired a used Heathkit DX-60 transmitter, built a Heathkit HR-10 receiver, and was licensed as a Novice and Technician in 1966, and as a General later that year. After that I did more AM than CW operating, and my code skill declined somewhat.

I was off the air a lot in the 1970s and 80s, but I did upgrade to Advanced class in 1981. Much of that time I was earning graduate degrees in theology and ancient languages including Greek, Hebrew, and Aramaic before finally settling in the business world. I worked in Information Technology for 37 years, primarily in database management, picked up an MBA along the way, and enjoyed working with both mainframe and UNIX/Linux computing environments. During years of light ham activity, I kept busy as a Scoutmaster and served in many ways through my church. I became more active in 2008, at first more with digital modes, but in 2011 my interest shifted to DX using mostly CW, which helped me make DXCC. Work kept me away again for some years until retirement in 2018. Since 2020 I’ve been taking CW Academy classes and using CW almost exclusively, working lots of CWTs, DX contests, and QSO parties. I want to do more CW ragchewing too, to build my headcopy ability.

Over the years I migrated from my Novice-days Heathkit station to one of the early solid state rigs in 1981 (Icom IC-720a), then to a Ten-Tec Omni VII in 2008 (still a great rig), and just this month to an Elecraft K4D. Our suburban cul-de-sac lot has enough space for some dipoles, a Hustler 6BTV vertical, and also recently a hexbeam covering 20 thru 6 meters on a 35-foot mast.

I have been married for 36 years to my Iowa Hawkeye wife Janet, who gets high marks for tolerating my strange need to string up wires between trees, poke up vertical aluminum tubes in the back yard that are connected to wires buried under the lawn, and trim tree branches that are in danger of encroaching on more important things like antennas. She is a land lubber, so she doesn’t join me often when I engage in one of my other passions, sailing a 38-foot sloop on Lake Michigan. She is a Chicago Bears fan and has possession of the TV on Sunday afternoons in football season. I prefer college football instead of the NFL, so I get the TV on Saturdays, especially when my Texas Longhorns are playing. My other main interests are amateur astronomy and reading (mostly theology, history, and some fiction). We live in Naperville, Illinois, and we have a grown son who is a published New Testament scholar and is married with three kids and teaches in a college religion department in Iowa. We delight in our three young grandchildren. I was never able to infect my son with the ham radio bug, but I’m hoping to work on the grandkids when they are a bit older!