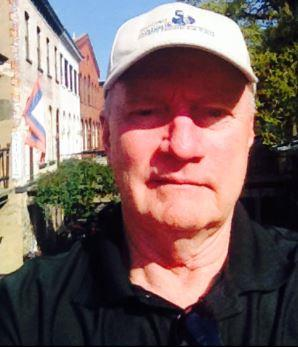 Thanks to Phil W2OZB for nominating me for membership and to my sponsors. It is an honor to be accepted into this highly respected group of CW and Amateur Radio Operators.

I was born and raised in an area just outside Albany, NY called Colonie. I graduated from Siena College in Loudonville, NY in 1965. I was immediately drafted but was able to join the US Navy instead and wound up spending the next 30 years there as a Surface Warfare Officer and retired in 1996. I served on six ships: an AKA or attack cargo ship; an AO or fleet oiler; two DDGs or guided missile destroyers; a DD997 Spruance class destroyer and an Aegis cruiser. I spent the other half of my time ashore, mostly in Washington DC. After retiring from the Navy, I worked for a defense contractor in New Jersey and Washington DC, retiring in 2005. My other hobbies include cycling, being a gym rat, home maintenance and keeping the Honey Do list at a minimum. Somehow seem to stay awful busy.

Growing up, I was quite interested in amateur radio due to two of our neighbors being hams and always being intrigued by all those antennas and hearing them on our VHF TV. They also let us kids in their shacks to watch them operate. I had subscriptions to QST for a few years but never got around to taking the exam. I finally had time to pursue the hobby after I fully retired and got my Technician in 2005 in New Jersey. I upgraded to General in 2008 after moving to Georgia, but didn’t have a station until April 2009. I upgraded to Extra in Nov 2009. So had a late start in this great hobby but am enjoying all aspects of it today. These days, I mostly work CW and various digital modes. I enjoy casual contesting: CW, Digital modes and some SSB.

I began my CW pursuit in 2011 teaching myself, of course the incorrect way by memorizing the CW character chart. All my operating was straight key and paper and pencil. I joined SKCC and eventually got the Senator level. I got serious in 2017 and took the CW Academy Intermediate class, then kept working on improving my speed and head copying. Then graduated from the Advanced course in May 2021. That introduced me to SSTs and CWTs, which has continued to improve my CW abilities.

Originally was licensed as KC2NYU, but have changed my call to W2ECK. This call belonged to the wife of one of those neighbor hams of mine growing in Colonie, NY

My wife and I live about 20 minutes southeast of Savannah on Skidaway Island. We are located about 3/4 of a mile from the coastal marsh and about 5 miles from the ocean. So not a 5 acre lot where I can put up an antenna farm, but it’s electrically quiet and not a bad radio location.