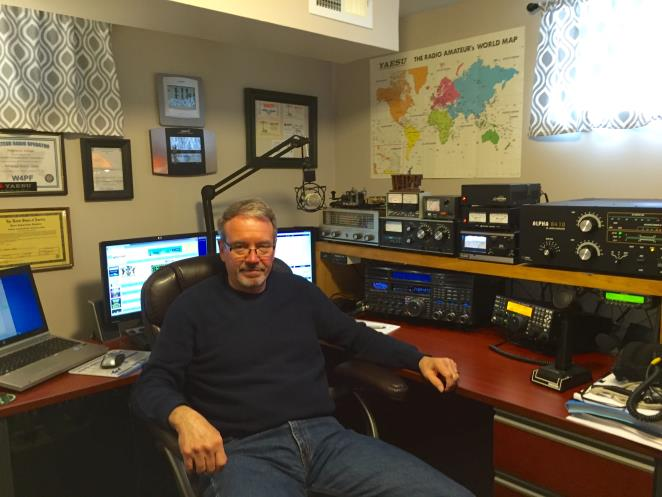 I started my trek into Ham Radio back in the 60s when I was just a child. Our next-door neighbors were involved with the local Civil Defense and had a military style receiver in their basement that would pick-up the local police calls. I use to go over there often trying to understand how all this worked. Also, a childhood friend’s father had a Zenith Trans-Oceanic SWL radio. While over at their house he would let me listen to the short-wave broadcast bands. This led me to really wanting to pursue this wireless fantasy. My parents gave me a “Lafayette Explorer Air Mark V” shortwave receiver as a Christmas gift in 1968. After that, I went thru the CB craze in 1969 thru 1970. There I made friends with several guys that were on the CB band and they were also Ham Radio operators. I was also very lucky to have had a couple of great Elmer’s (Murf W4MRF & Uncle Bud W4QJU, both who are now SKs) in the mid to late 70’s.

I received my Novice license in January of 1971 and was assigned the callsign WN4TPF. Five months later I upgraded to the General class license and received the call WB4TPF. I passed the Advanced class in March of 1972 and in March of 1987 upgraded to Extra class. In 1996 I applied for the vanity call sign W4PF and received it. I’ve been licensed for over 47 years now.

I’m a graduate of the University of Louisville Speed Scientific where I majored in electronics and spent some 46 years working in the electronic field. I just retired from the local Gas and Electric Utility company the first part of 2017 after 39 ½ years of service where I held several technical positions; the last being the Telecommunications Supervisor.

My HF station consist of a complete Elecraft K3s line, a Kenwood TS-590SG & an Alpha 8410. The antennas are a HEX beam, end fed inverted “L”, and 40m OCF dipole. I spend a lot of time chasing DX, doing a little contesting, and monitoring the bands. I also enjoy any 6-meter openings. And oh, my preference is working CW!

Thank you for allowing me to join your group, and many thanks to my main sponsor, Glenn Petri KE4KY.