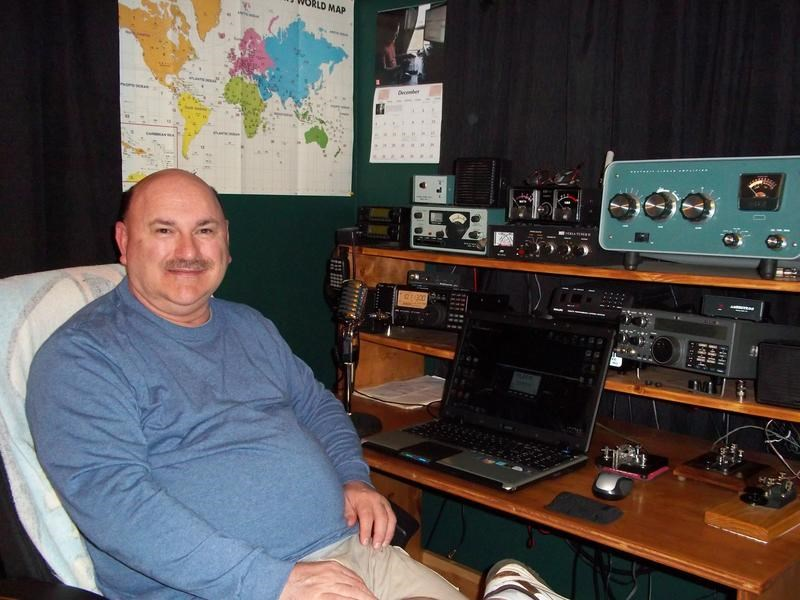 Thank you to all of my sponsors, and especially Larry, K7SV, for initiating the process. I am proud to be a member of this organization and will always strive to be worthy of your confidence and trust.

My fascination with radio began one cold and long ago November morning in 1964 when one of my fourth-grade classmates pulled a magic wand out of his lunch box. It was in the form of a telescoping antenna attached to a small black box labeled “SpacePhone.” It was just a walkie-talkie, but its effect on me was hypnotic. Of course, I was only nine years old at the time and I knew no one who understood – or even cared about – anything electronic beyond the on/off switch or channel selector on the TV. So, my chances of becoming a young ham were somewhere between slim and none.

My fascination with two-way radio communication never died, but I didn’t really grasp the concept of different radio services until I was in high school when I found QST and later the old red and black Radio Amateur’s Operating Manual at a local bookstore. By that time I had already gone through a couple of pairs of my own walkie-talkies and convinced my dad to apply for a CB license (ancient call sign KDR 2371). I used some money I had made working construction with my dad to buy a Realistic Navaho, but within a year I had added a shortwave receiver to my “shack” and began studying seriously for a Novice license.

Alas, life often leads us on meandering paths, and hopes and dreams are sometimes not quickly realized. Between busy high school years, college, and beginning both a career and a family, it took me until 2001 to finally be licensed as KG4LDD, no-code Tech, followed by a quick step up to 5 wpm General. By the time I upgraded to Extra in 2007, the 20 wpm requirement had been dropped, although I always felt like I should push myself to that level. But I started out, as I suppose most newly minted Generals do, on phone.

I labored to make DX phone contacts with my poor station. And then one day fate stepped in. I was at home, sick with a throat so sore I could barely swallow, but literally aching to be on the radio. That’s when it hit me. “Hey, I passed a CW test,” I thought, and began eyeing my old practice oscillator with mechanical murder in my heart. Less than 10 minutes later, the corpse of the oscillator lay on the floor of the shack, the key was wired and plugged in, and I was nervously sending CQ at some phenomenal speed, far faster than I was able to copy. After I slowed down, though, I finally made that first CW contact, sweating it out and copying enough by hand to actually have a valid contact. I was hooked, especially after I discovered that working DX with CW was easier than with SSB. DX on the low ends of bands also motivated that step up to Extra.

I still work a fair amount of SSB, but with the help of neighbor and mentor Ned, K1GU (CWops 884), I got into RTTY about four years ago, and that is what got me really hooked on contesting. I had always avoided CW contests, though, because of the intimidating speeds, but I finally decided to just jump into a few and do the best I could. I already had enough CW (and life) experience to know that you can’t improve unless you push your limits. I also began working the Wednesday night CWT’s, which have probably been the greatest help of all in making feel comfortable with the higher speeds. I have more trouble now copying 15-18 wpm than I do 28-30 wpm.

Other than ham radio, my wife and I like to hike and fish in the nearby Smoky Mountains or on some of the many TVA reservoirs. We are also both avid readers, and I am a classic film buff. We have one grown daughter and one two-year-old granddaughter. We live with one dog and two cats that provide hours of entertainment and companionship. We are both school teachers whose 30th year doing that is now far behind us. She has taught several grade levels at different schools and is now a librarian, but I have been at the same high school teaching English for 37 years. We both plan to work one more school year and then hang it up in favor of more time with the granddaughter, more time outdoors, and definitely more time on the radio!