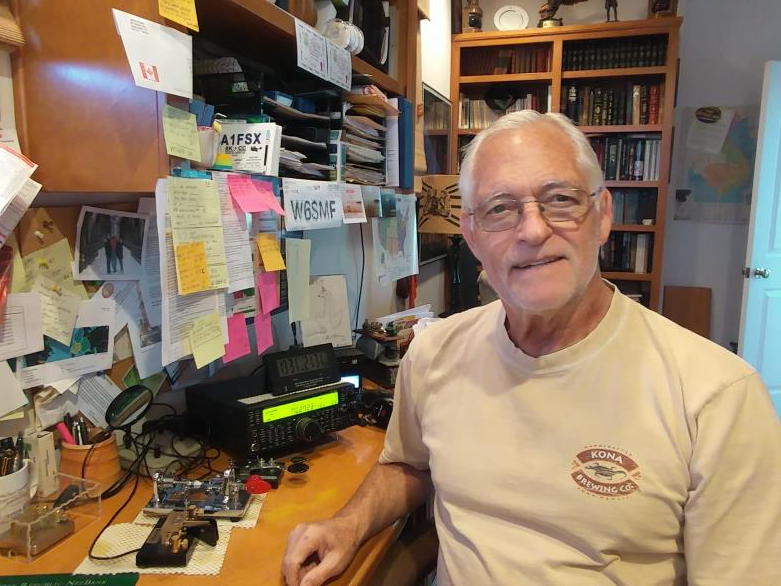 The seed for my current Ham hobby started in 8th grade, 1957. I was 13 years old and a buddy and I signed up for Mr. Miller’s Novice Ham class. My Novice call was WV6BCO. That Christmas, my father surprised me with a fairly new/used Hallicrafters SX-71 radio. Now that “should have” started me on a long ham journey and career with, say an EE degree or such. But, fate would have me merely dabbling with the radio, never truly making a QSO contact, and becoming more interested in playing saxophone, meeting girls and high school sports.

College got me interested in languages, resulting in a couple of years at the University of Madrid, Spain in 1964-66. I got my BA in Spanish from UCLA in 1967. My plans to be a teacher were sidetracked by the Draft. I enlisted in the USAF pilot training program. I flew mostly heavy cargo jets; C-141’s and C-5’s, except for a year in a C-123K, at Phan Rang AB, Vietnam.

The best part about the military was meeting my future wife, Robbie, while at pilot training in Lubbock, Texas in 1968. I’m a Southern California native and never dreamed I’d find my life mate in western Texas, but 47 years of marriage and one daughter later, enlisting in pilot training was one of the best decisions I ever made.

I retired in 2003 from flying and here I am in the big ‘ol circle of life, coming back to something that intrigued me some 60+ years ago.

I passed the Tech exam in May 2018, General in July 2018, then started to learn the code again. I discovered CWops and these past 18 months have been a blur of code classes. I’ve taken four in all and want to thank my Advisors; Buz AC6AC, Alex PA1FOX, and Rob K6RB for their dedication to making learning fun and enjoyable. Bottom line for me is I feel like someone who just got out of class with lots of “book learning” and not much practical experience. I’m jealous of you former military radio operators! I hope to take part regularly in CWT, DXing, eventually getting proficient enough to rag chew and signing up as an Advisor.

See you on the bands.