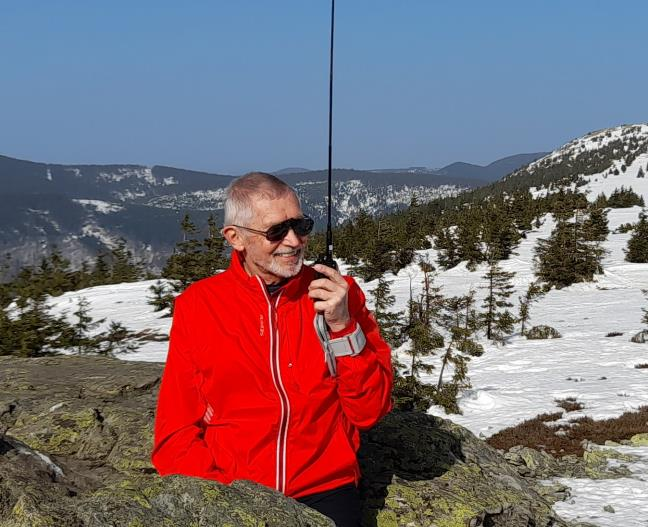 First of all I have to thank Adam, SQ9S, for nominating me, as well as all the sponsors (SQ9S, OK2PAY, SM5IMO, OK1RR, PA3AAV, K1DJ and N4ZR). It was a pleasant surprise to find seven sponsors listed within 24 hours after the nomination.

I was born in 1946 in a little town Hranice in the northeastern part of Czechia where I still live. Out of my four children, only one son is a ham (Tom, OK2BB).

My earliest encounter with ham radio was when I was a child. My parents used an old two tube radio and I sometimes I heard strange voices interfering with the broadcast. Only much later I found out that the voices came from OK2KLF, a radio club located half mile from our house.

Being interested in electronics, first I started building the crystal radio and later tube superhets from the commercial kits. I read the Czech Amateur Radio magazine and learned of hams. The column I always read first was the DX News.

I became a member of the Czech ham organization and got the SWL registration number. My SWL log was soon pretty full as well as the QSL cards collection. Indeed, my affection of collecting paper QSL cards is still there. While attending high school I was a member of the local club OK2KLF. I have fond memories of my Elmers OK2BBP (SK) and OK2LN (SK).

When I was studying electrical engineering at the technical university in Brno, an “OL“ Novice class (10 W, 160 m only) was introduced for the 15 to 18 years old. Being 17 at that time, I got one of the first licenses issued and became OL7ABS. At the age of 18, I became OK2BJU and gradually went through the license classes C, B and finally A, sort of Extra. I devoted a substantial part of my study time to activities at the university radio club OK2KOJ. I also started a lifetime friendship with Bob, N4OL (SK). We used to have long CW QSOs every week.

I built a simple 100 W CW transmitter from scratch and hooked together an old all-wave receiver with an WWII German surplus receiver tapping signal from its if-stage. With the W3DZZ antenna hanged high across the street I started to hunt DX and take part in contests.

My professional carrier made me travel extensively all over Europe. Therefore I was active from many CEPT countries. While being at Siemens company in Germany I met Klaus-Dieter, DL4NN, and our families became close friends until his death two years ago. DL4NN had convinced me to join DIG (Award Hunters Club).

My current DXCC score is 337 entities confirmed (missing – you guessed it – Bouvet, Crozet and N.Korea), 9 band DXCC and decent Challenge status. Among other wallpapers there are 5BWAZ, WAS, IOTA, USA-CA and others.

When I was looking in WA7BNM calendar to see what contests were ahead, I stumbled upon CWT and started searching what sort of animal it was. I took part in a number of CWT sessions and liked it. When I saw the callsigns of CWops OK members who I really respect, the decision to become a member came easy.

Besides ham radio I like outdoor sports together with my dear wife: mountaineering, cross country skiing, bike tours, orienteering and occasional canoeing. After two hip joints replacements, a heart surgery and 75 years of active life, the time of demanding alpine undertakings is over, but I still like to ascend a mountain and activate SOTA. After twelve years of SOTA efforts, I am a fivefold Mountain Goat now.

When not operating radio, I like listening to country music and playing guitar for my friends.

Oops, I am now well over the requested 500 words, so I should better stop boasting.

CU on the air.