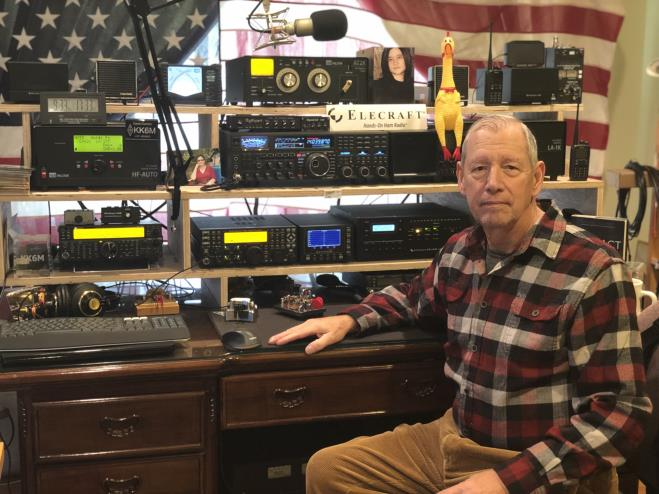 Just a little bit about my amateur radio career here. I was first licensed as KA6EBU December 6,  1978 and upgraded to KB6MK in March of 1979 three months later with a code requirement of 13 words per minute as tested at the Long Beach FCC office. That lady down there just loved to say out loud,” Sony you did not pass you will have to try again next month!” That came later when I went for the Extra and the 20 words per minute requirement.

At that time, I was on the air every day working 10 and 15 meters after work in the afternoon with Asia and EU in the mornings sometimes on SSB and CW. In the evenings on 40m CW doingregular type QSOs . It took me another year of really consistent hard work to get to 20 words a minute. That FCC lady told me twice to come back when I was cutting the mustard. I finally passed the FCC 20 WPM code requirement for the Extra Class license after the third try in March of 1980. I received the call sign KK6M that I have had ever since. I just passed the 40-year mark as a licensed amateur radio OP.

Sunspots were abundant then and propagation was really outstanding so running JAs on 15m was an everyday thing. My biggest thrill was when I was calling CQ on a somewhat flat 10m band and a VU station comes back to me out of the mist with a fluttering CW signal around 5 by 3 but totally solid due to such low band noise. I was using a full size 5-element 10-meter beam at the time up about 35 feet. I swung the beam around and found the best signal was long path. I loved 10m then and still consider it my fun band. Going through my old cards recently from the early 80s I found I had 106 countries confirmed on 10 meters mixed. Life intervened and I was off the air here and there for periods of time. I started building a station again here in Arcadia 6 years ago.

So, yes it was tough learning code 40 years ago. There were great ops around and plenty of classes maybe even Farnsworth ideas but no CWops. I had to do it the old-fashioned way and it was slow going with lots of plateaus at different speeds. I took a class at Lockheed Amateur Radio Club back then with Bill Walsh a W6 call. He was such a great CW guy it really blew my mind just listening to him head copy his Russian friend at 35 to 40 WPM after the class. What an inspiration he was.

I’m no prodigy believe me. This has taken a long time. Complaining about it to Dave W6BK, he suggested that I check out CWops Academy. What a Godsend that has been. Completing the Level 1 class with Bill K0MP was an awesome experience and I look forward to continuing through the rest of the course work in level 2 and 3, God willing and the creek don’t rise too high.

I hope to work you all in the next CWT.