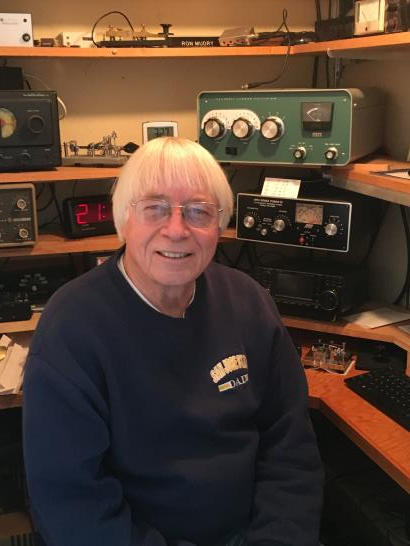 I want to thank Hank, W6SW, for nominating me and those who were so kind to add their names as my sponsors.

When I was born in 1945 my father was a commercial fisherman. For communications, his boat was equipped with a transmitter that was limited to the bands that the commercial fishing boats used when operating off the coast of California and Mexico. The receiver onboard was a Hallicrafters Model S-38A which covered from the broadcast frequencies up to 30 megacycles. In the early 1950’s the price on albacore dropped and my father got out of fishing for a living. The receiver somehow ended up in my bedroom and I became interested in shortwave listening.

In the ‘50s the world was a much bigger place and to hear broadcasts from Europe or Asia was simply amazing. I first was licensed as a novice, WN6FPS, in the spring of 1963. The S-38A was put to use along with an EICO 723 transmitter that I had built from a kit. At that time the transmitter kit, at $68.00, was the most expensive thing that I had ever bought. In short time I “fried” the EICO 723, I had no clue of what SWR was and I think that’s what did me in. I was off the air for a short time (25 years) and was relicensed in 1988 as KB6YUD. I progressed through Technician, General, Advanced and finally Extra in 1998. For the next twenty years I used the call W6FPS, dropping the N from my original novice call. I never felt quite right as an Extra because the FCC had dropped the 20 WPM requirement for Extra and it felt like I was cheating. I think now I have made up for that past sin.

As you can see from the accompanying photo my radio room is somewhat on the smaller size as Ham shacks go. The entire shack is located in a 4’ x 4” closet. What it lacks in space I have made up with clutter. My equipment includes several homebrew QRP rigs, an EICO 723 (not the original one that I had built as a kid). I have three transceivers, an ICOM 746PRO, an Elecraft KX3, and an ICOM 7300. The only receiver is a Hallicrafter sS-38A, sadly not the one from my father. I also have a Heathkit SB-201 to which I have added a few mods, and lastly a recently purchased Dell computer that I have dedicated solely to ham radio. I enjoy operating CW (wish I was more fluent) so I have a small key collection, one bug, two iambic and five straight keys. I also like to build antennas, but due to antenna restrictions (XYL) they are mostly portable or something that I can easily setup for a weekend event.

My “On the Air” time is limited but I try to make time for a few of my favorite events, ARRL Sweepstakes, California QSO Party, monthly SKCC SKS & WES, weekly CWTs, and the Hawaiian QSO Contest. In particular I like running QRP in the Hawaiian contest because my QTH in Huntington Beach makes for a great equalizer.

Because “you can’t work um if you can’t hear um” I am working with a few friends to put together a remote station with a modest tower and yagi. Hopefully soon I can put many more CWops members in the log.