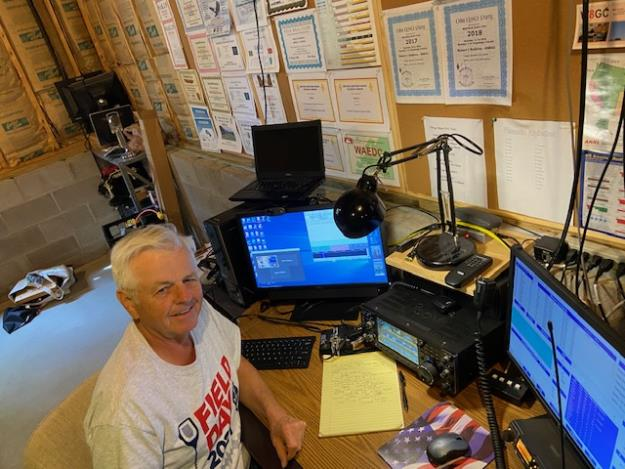 My first experience with amateur radio came when I was nine years old and a group of men set up radio stations in our local park in Columbus, Ohio. My brother and I were allowed to carry soda from the main operation to the other stations both Saturday and Sunday. I found out later that this operation was Field Day.

I have always been interested in electronics from an early age. This included tearing apart old radios from Goodwill and rebuilding them and even building a spark gap transmitter using an ignition coil and an antenna. I would key the transmitter and my brother would walk around the neighborhood with an AM radio to see how far away he could hear it. I think the statute of limitations for operating an illegal transmitter has run out by now.

There were several Elmer’s who helped me get my Novice license and build my first station somewhere around 1962. My Novice call was KN8RGI. I don’t remember taking my Novice test, but I do remember sitting before the FCC examiner in the Federal Building in downtown Columbus, Ohio to take my General exam and code test and my call became K8RGI.

My first station consisted of a Hallicrafters S-40 receiver and a Heathkit DX-40 transmitter with a dipole antenna. While I enjoyed operating CW on the lower bands, most of the local hams were on six meters phone. I was able to obtain a six meter beam and put it on a small chimney on the back of our house. After that blew down, taking the chimney with it, I moved the beam to the much larger chimney for our fireplace. After that blew down, taking the chimney with it, my dad let me put up a tower attached to the side of the house.

While I enjoyed being on the air, my real passion was designing and building things. I built quite a few one tube transmitters for other people and power supplies. I was very active in our high school and college radio clubs. I also participated in Field Day every year. Field Day is still one of my favorite events.

After college, work and family became a priority and I dropped out of the hobby for almost 30 years letting my license lapse. After I retired in 2010 I found out my old call was still available. I studied over a weekend and was able to pass my Extra exam and eventually get my old call back.

Things had really changed in 30 years with everything being computerized. After receiving my license back again my first transceiver was an Icom IC-7300 which I then upgraded to an Icom IC-7610. My main antenna is a long wire with tuner which I use on all HF bands. I have added a receive loop, 2 meter vertical and cobweb antennas.

I enjoy operating CW and digital modes and participating in weekend contests.