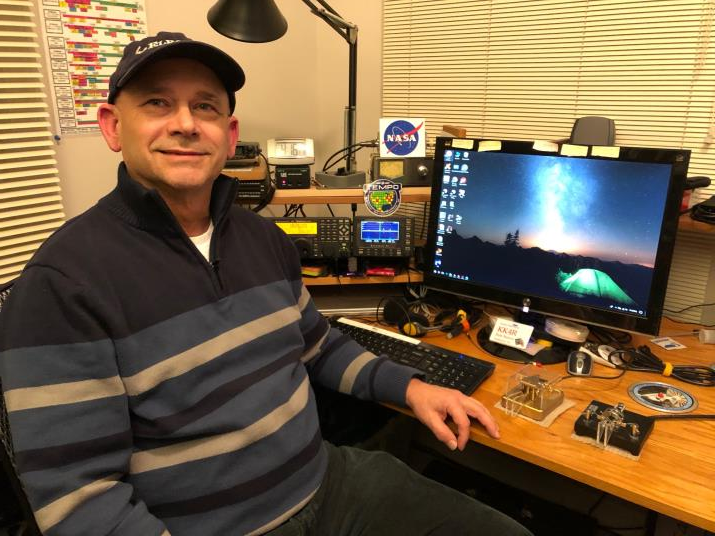 I’m excited to be a member of CWops and appreciative of the help I have received via CW Academy to get my code up to a higher level. Thanks go to Tom Morehouse, K4AEN for pointing me in this direction.

My story starts with my member number, 1953, which is appropriately my year of birth. Although I may not have been born a CW operator, my first word was “dah”, and fate may be involved. In truth, my father started me down the road to radio by tossing a Heathkit catalog to me when I was eleven or twelve. I must have showed interest, because not long after a transistor radio kit and some tools showed up. Mom set up a card table in the den, and I set to work. To my utter amazement, the radio worked, and I was hooked on electronics. Dad kept me supplied with kits, mostly audio equipment. However, I was always lusting after the ham gear that I saw in the Heathkit catalog.

Although I studied up on ham radio as a kid, I couldn’t fathom how to learn Morse code off the page of a book, and I had no idea of where and how to take the exam. Hams were just voices I heard on my short-wave radio and code I couldn’t copy. Finally, in grad school at NC State, a friend asked me if I ever thought of becoming a ham. We got our licenses that year and went to the Shelby, NC hamfest and bought HF radios. Back then, we had to use the code on HF. My friend made two QSOs, one of which was with me and the other with a mutual friend. That was enough for my buddy – he never got on the air again.

I had waited so long for this, that I wasn’t going to stop, even if it meant sending CQ at 3 wpm! Which I did on 15 meters, painfully tapping out the characters and wondering if my signal was going anywhere further than Charlotte. Then my third QSO began. I heard a call that started with a J! Where did that come from?! Finally, I got the whole call and found out my friend was Taroh, in Japan! Now I had to send my name and location, but what was my name? My brain was overheating and blowing up like a hot air balloon! I may have bled from the ears, but I finished the QSO, and ran to the phone to call my Mom and Dad, and two sisters, and my buddy, etc.

Miraculously, Taroh was able to copy enough of my tortured code to send me a QSL card. A few years later, I was amazed to see that same card in a Heathkit catalog, propped up against a transceiver, and years after that I read an article about Taroh Yagi, a ham famous for hunting down newbees making tortured, ultra-slow code calls, hoping to be their first QSO.

That’s enough story-telling. Here are the stats. I’m an electrical engineer, working in system engineering on a sensor project for NASA. I live in Yorktown, VA and keep a modest station: a K3/P3 combination with two wire antennas. In the beginning I spent lots of time ragchewing on CW but never got very fast. I worked traffic and got my code up to the limit of my writing speed, then kids and distractions, like work, cut my operating time way down. More recently, I have spent time building radios and accessories, but lately, I’m back to operating, when I have time. That usually means working a contest or some DX on the weekend. After my CW Academy experience, I’m thinking about getting back to some ragchewing. I hope to meet some of you on the air.