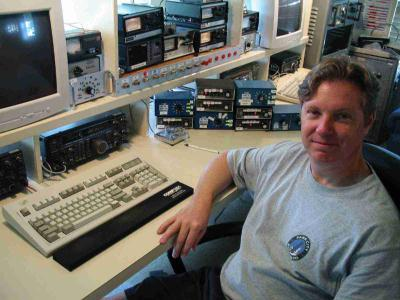 In the mid-70s, I was in Junior High and fooled around with CB, crystal radios, and was amazed that I could hear Chicago’s WLS in my little Texas town with just a transistor radio. Then my buddy, Mick (now K5YV) got his license and showed me his station and his logbook. I learned the code and got my feet wet with his Drake 2B and DX-60.

In January 1977, I was licensed as WD5AAT, and made a few QSOs with my dad’s S-38 and a DX-60. I soon upgraded my license and my radio to an SB-102. Wow! As I teenager, I could put on my headset and be transported to other worlds where I could handle traffic with a college professor N5TC, a lawyer WA5RKU (now W5CU) on the TEX CW traffic net. I could contact places I’d never heard of, including many behind the mysterious Iron Curtain. I could have a nice ragchew and enjoy the wows and FBs when I sent my age on my bug.

We had a small radio club in my home town of Lampasas that provided many great Elmers including W5GFR, WB5RPU (SK), K5SOR, W5LKT (SK), and W5YC (SK). W5GFR hired me to work at the local radio shop after school where I’d set up business band radios and do basic repairs on CB rigs.

I was very busy during my time at the University of Texas but visited the club station W5EHM (now N5XU) a number of times. After college, I was inactive for about 10 years but in the early 90s, I picked up a QST and felt like Rip Van Winkle. Look how tiny those radios are! And they can do what?! I picked up some VHF gear and an old Icom HF rig, and jumped right back in. After a few years, I finally put up a 40-foot tower and my first tribander. Wow – was that ever a step up! I started chasing DX and doing limited part time contesting and having a great time.

In the mid-90s I discovered the Central Texas DX and Contest Club. Holy cow – this was the brain trust of ham radio in Austin! These guys weren’t just working a new country every once in a while, they were at the top of the Honor Roll. They weren’t just fooling around in contests, they were WINNING! For ARRL DX CW in 1997, N3BB held an open house at his multi-tower station, and I jumped at the opportunity. I had never seen computer logging, used monoband or beverage antennas, and I certainly never had multiple stations coming back to my every QRZ. After that, I wheedled my way into other guest op seats at other local stations including the new superstation at N5TW.

Then in August of 2000, K5TR asked if I’d like to operate sometime at W5KFT. I’d met George while we were both in high school, but we’d lived about an hour apart. Anyway, he turned me loose with two radios and the monobanders at KFT for NAQP CW, and I had a blast! He’s coached me about contesting and station maintenance for some time – I still pester him from time to time today. He was planning to build his own station and wonder if I’d be interested in taking over maintenance of W5KFT. I didn’t have much tower experience, but I learned a lot from George – at least enough to know my limits. J I shook hands with Bryan, the owner of W5KFT at his family’s ranch, and the rest is history. I’ve been operating the major CW contests from W5KFT for 18 years now. I’ve also operated from great Texas stations including K5TR, N3BB, and K5NA.

I’ve had some great opportunities to contest as DX and have operated from HC8N and several times from ZF1A. In 2007, I met John WC0W/V31TP/V3T and just made my tenth trip to Belize for ARRL DX CW. We’ve won M/S a number of times and in 2015, I won my first contest as a single op from there.

This year, I did my first DXpedition to the Austral Islands and operated as TX5T. There were five of us, and not having met some of them, I wasn’t sure who would operate which modes. After 72 hours, we saw a cluster spot that said, “Guess they left their microphones at home”. Okay, okay – we finally swung the boom mikes down, but as soon as the pileup thinned, we would all go back to CW!