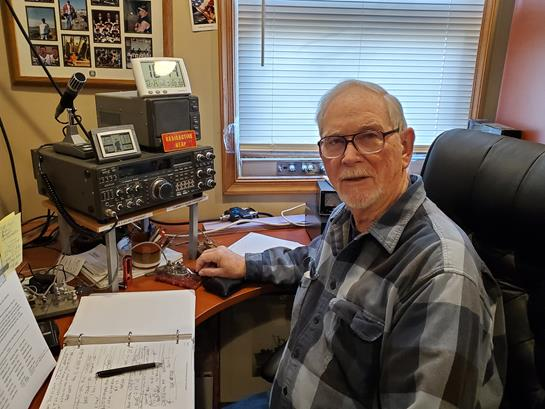 First of all, want to thank my sponsor Tom AF4NC, for nominating me for membership in CWops, and for those that forwarded support for my nomination.

I have enjoyed many hours of operating on the ham bands since first being licensed as WB3LNZ in 1978.

I had trouble with learning the Morse code at first, but with the help of my XYL Pat, who had learned code in Scouts, and her uncle Hal, who had operated knee-keys in naval aircraft, I began to understand it much better (practice, practice!).

My ham radio Elmer, Tim Cushman KB3TC, ex WB3FXJ, was very instrumental in my learning and operating CW. My first amateur radio was my Kenwood TS-520s (which I still operate with), and my new Nye Viking navy knob straight key, and I was making CW QSOs. I installed the 500 Hz CW filter, and with that rig, I was able to enjoy my first CW contest, the November SS CW, 1978.

I’ve worked many contests but enjoy the CW ‘tests mostly.

I am past/charter president of Delaware valley VHF Society, a local club in southeast Pennsylvania. Our first foray in VHF contesting showed that we were very competitive, having won first place-local category, at least 4 times.

Since the early 1990’s, my activity on ham radio waned a bit, with the usual life’s activities. I am former power plant chief engineer for Johnson & Johnson in North Brunswick, New Jersey. My experience for that position, and several other power plants after J&J closed, was gained in our U.S. Navy from 1957 to 1963.

Recently, having retired from at least two companies, I have been able to devote more time to amateur radio.

That extra time for amateur radio was shortened quite a bit recently, when my wife was diagnosed with dementia. Providing care for her kept me real busy, until it became necessary to place her in a devoted memory care facility. She is doing well there at present.

More recently, radio-wise, I have been involved with checking into the Pennsylvania training and traffic net (PTN) and am currently one of the 7 pm local net control stations on 3.585 MHz. Learning net procedures has helped with my CW abilities, as have the rag-chew QSOs that I enjoy.