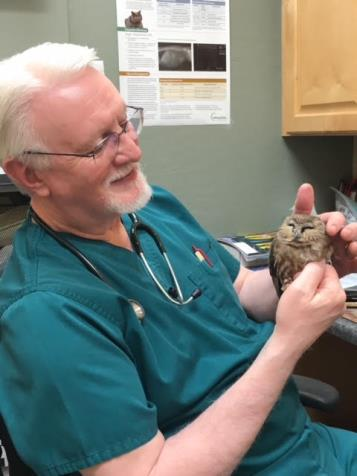 To begin, THANK YOU to my CW Academy advisors: Ron Stark, KU7Y (Basic), Bob Carter, WR7Q (Intermediate) and Sergey Nikiforov, KK7RR (Advanced), to my classmates and to those I have worked in the CWT and during “Giving Back” sessions for their patience, encouragement and help learning CW. I still work in Zoom sessions with some of my former classmates most mornings. Some (most) days we practice, but some days we just chat and occasionally we meet on the air one on one. Finding these friends has been an unexpected measure of good fortune.

I am a retired veterinarian who has experienced several career avenues in the 50 years since graduating from Michigan State University. The profession has enabled me to work in a humane society facility, in private general small animal practice, and for 15 years in medical research, finishing out my career doing general small animal dentistry and oral surgery in private practice again. It was a rewarding journey. I met many fine people, made good friends and learned a lot in each situation.

I became interested in electronic circuitry as a sophomore in college when I was required to fabricate some instrumentation for a study I was doing with my supervising professor with an NSF grant. It led to an exploration of ham radio. I worked as a “gofer” at Main Electronics in Lansing Michigan. Gordon Main, W8OCK (SK) was my boss and encouraged my interest in ham radio. But resources and time to learn CW were very limited, and once I was admitted to vet school there was no time for anything but study. Then of course, life gets in the way. But after semi-retiring my interest in ham radio rekindled. By 2019, CW was no longer a requirement for licensing. I passed the Technician and General exams in October 2019 and upgraded to Extra early in 2020. I regret that Gordy passed before I could tell him that I finally got licensed.

After upgrading to extra class I decided to learn Morse code. I worked on my own until discovering the Long Island CW Club and shortly thereafter, the CW Academy. I felt I would make better progress with the structured format of CWA and enrolled. I was not disappointed. My advisors were great, (well they are still great).

My station consists of an FTDX 101 MP and an Icom 7300. They are both fine radios to operate, but I have an Elecraft K4D ordered and will likely replace the Yaesu with that when it becomes available. My Arizona QTH uses a DX Commander vertical antenna. During the summer I’m in Colorado and use a 40-20-15-10 EFHW. This summer I’ll be working on a DXE hex beam, which may come back to Arizona in the fall. I use Begali Pearl paddles and sometimes a Vizkey vertical bug (Ron Stark introduced me to that one). I have a couple of other keys as well, but they don’t see a lot of use at this time. I enjoy contesting, especially the CWT, but will never be a “big gun.” Bob Carter introduced me to DX. I enjoy that and am working to get DXCC all CW. Then there is the relaxing rag chew and the opportunity to meet a new friend, or renew an acquaintance that reminds me of the reason I became interested in ham radio. I’d like to get involved with the “Giving Back” program and helping others along in their CW journey.

Other interests include fly fishing and woodworking. I used to fly a biplane in aerobatic competition, run, bicycle and train karate, but age and its related effects now preclude those pursuits.