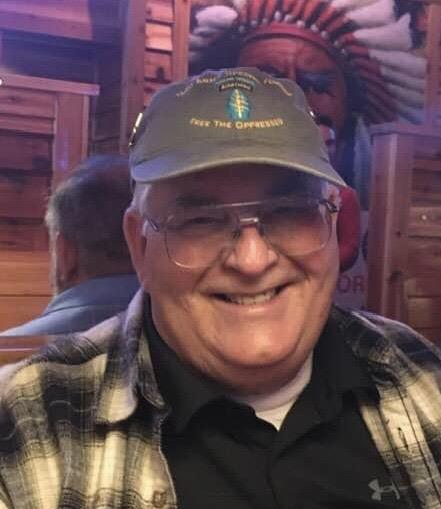 I dedicate this Morse code journey to SFC (U.S. Army Special Forces, Retired) Donald Edward Kehoe, who passed in 2006. He was my Special Forces Radioman; my inspiration to make this journey, and showed me that with a piece of wire, a cootie and CW genius you could literally talk to the world from the middle of nowhere.

Been a ham since 2004 and live in Corinth, TX near DFW airport. My age is 77 years. A retired water and environmental lawyer from the New Mexico Office of the State Engineer, I have been married 46 years with 3 children and five grandchildren. Spent many years in the law as a JAG, an Assistant US Attorney and in private practice. A Vietnam veteran, I served 5 years in Europe and Southeast Asia. Served with 10th Army Special Forces as Captain and ODA-1 Team Commander in Europe and the Middle East. Our communications were all in Morse code through an AN/GRC-109 army radio. My radioman did the CW. Served with 1st Special Forces Group as an Assistant S-3 and S-3 with classified projects, out of 46th Special Forces, Lop Buri, Thailand. Graduated from Brown University; went to language school and university in Cologne, Germany; Defense Language Institute, Russian Interpreter/Translator Course, Presidio of Monterey, with fluency in German and Russian. Other hobbies are woodworking, genealogy and sailing. I own a sailboat. It is a West Wight Potter 19.

My interest in radio began when I was 12 years old in 1956. My father purchased me a Heathkit AR-3 receiver which we built. I learned about Ham Radio in Explorer Post 186 in Carlsbad, New Mexico, but never could pass the CW test. With Sputnik, my interest turned to astronomy, telescopes and photography. Spent many nights in Carlsbad looking at planets and stars in the clear, pristine atmosphere of New Mexico in the Guadalupe Mountains. During high school, I developed an interest in spelunking many of the over 400 caves in the Carlsbad, NM area and in genetics. In 1962 I was the finalist in Biology at the International Science Fair in Seattle, WA. My science project was “The Effect of Ultrasonic Sound on E. Coli.”

I renewed my interest in amateur radio in late June 2004. I visited the Albuquerque Amateur Radio Field Day at a local city park. Among the multitude of Yagi, verticals and wire antennas, large transceivers, big generators, I noticed a lonely man with a backpack strolling, through the bustling, electronic maze and multitude of persons calling CQ, to a large park light pole located more than 25 yards from the rest of the pack. His name was Howard Peavey, K9PV. Soon Richard St. John, K5RSJ, joined him. Together they set up a small camp table and chair next to a large light pole. They pulled a small, original IC-706 out of the backpack. They loaded the light pole as an antenna and hooked up to the chain link fence around the park as a counterpoise. Both of them taking shifts, they sent Morse code all day and night. They contacted Russia, Europe, Asia….to my mind they were talking to the world. They brought back vivid memories of my radioman and my Special Forces missions. The rest of the pack made very few contacts, but with Morse code those two piled up most of the points. I was sold. That’s what I wanted to do.

Well, I did it. Under the mentorship of K9PV and K5RSJ I passed the 5-wpm code test and got my technicians license on July 15, 2004 as KE5BZI. My first station was that Field Day station of K9PV, which he sold me at a very reduced price. Later I got my General and Extra. I had two vanity call signs, K5PCA and then my current call sign NE5ET.

Soon, very soon, I was envious of those persons communicating, rag chewing, and contesting with high-speed CW. I joined the Albuquerque DX Club and watched in awe as Bruce Draper, AA5B, Bill Mader, K8TE and Scott Davis, K5TA were all contesting at high speed. Howard Peavey and the bunch at SARA, the Socorro Amateur Radio Club, were doing QRP from mountain tops before SOTA became a common word. I discovered a new CW class online by CW Operators Club called CW Academy in 2012. I had been using Dale Finley’s, N1IRZ, of SARA, course with the Koch method, but wasn’t having much success. Four of us signed up for the CW Academy Beginners Class. The instructor was Rob Brownstein, K6RB in October-November, 2012. Two of us graduated, but two of us did not, myself included. My internet and computer were not up to the task of OOVOO online, but I did learn a lot going to class, even though it was difficult sending and receiving over OOVOO. Rob was extremely encouraging and would work with me individually online because my OOVOO didn’t work. But I missed several classes, which back then was fatal, and didn’t graduate. Rob encouraged me to take it again, but there were long waiting lists. I was very busy at work, and slowly drifted away…again.

After retiring, we moved to Texas near Dallas, to be nearer to my children and grandchildren. When I arrived, I joined several clubs including the Denton County Amateur Radio Club, DCARA, the Lewisville Amateur Radio Club, LARA, the Lake Area Amateur Radio Klub, LAARK, and the DX Contest Club. In 2019 I met Eric Silverthorn, NM5M, and Steve Kline, W5JK. Steve and Eric were already excellent in Morse code and were CWops members. They assured me Morse code is a lifelong practice thing, not genes, and encouraged me to take the CW Academy’s CW Beginners Course being given by Eric Silverthorne and his associate Ken, AC5EZ, in December of 2019. Eric is a wonderful instructor, encouraging me to practice every day, at least an hour, no writing allowed, and taught me how to use a paddle, not a straight key. After graduating, I took the Basic Course with Mike Brown, N7ID, and his associate Ken, K4EES, and a second time with Eric, NM5MM. I took an unofficial Intermediate summer course with Buzz, AC6AC and an official Intermediate course with Tom, WA9CW and his associate Steve WD4CFN. My first Advanced course was with Joe, KK5NA and associate Bruce, K8UDH, and the second Advanced course was with Buzz, AC6AC and his associates Rich, K4DPM, and Tony, KB9LLD.

I am grateful for all of my instructors and associate instructors; for their patience, guidance, encouragement, and mentoring. I am still a humble work in progress. I also have made many CW friends during this journey and remain in constant touch with a number of them. I would like to particularly thank Dick (K7ULM) for pushing me hard, Steve (W5JK) for encouraging me to practice and continue our CW QSO’s every week, and the rest of the “iron fisters:” Greg (K4KO), Chuck (K9PLX) and Dave (AG7TX) for encouragement, camaraderie and the POTA, SOTA, ZOMBIE fun times. I have made many CW friends including Randall, KG5IEE, Craig, N2DA and Mark, AA0YY, and so many more.