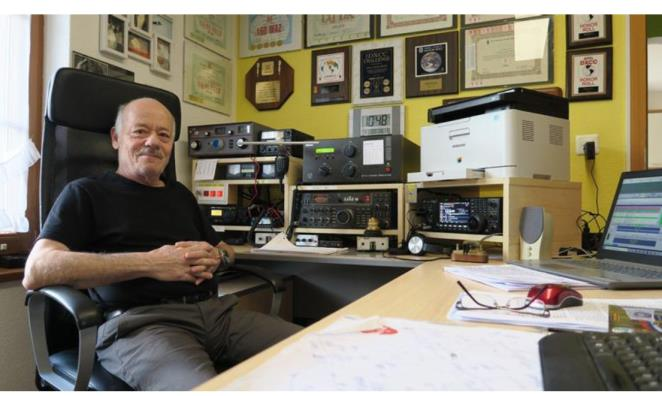 First of all, I would like to thank Martin, OK1RR for the nomination. I didn’t know the CWops before. It was only with the special call signs for the anniversary that I learned about it. I would also like to thank HB9ARF, N1DG and AA3B.

I was born on April 17, 1954 in Basel. No one in the family knew amateur radio. During my training I learned that there were Morse courses for the army. Since I don’t like hiking and therefore didn’t want to join the infantry in the army, I signed up for these courses. After one semester I was able to record 40 bpm, which was enough for the army. So, I came to the military intelligence service and learned CW up to dream about during 17 weeks of training. At the end of the training I was at 100 bpm.

In 1974 I then requested a SWL call sign and was from then away as SWL on DX hunting. I was HE9ABB at the time. After my training as an electrician, I got married and didn’t practice the hobby anymore. But I have always given telegraphy courses for the army as a teacher. In 1984, a former neighbour invited me to join me, who was an amateur radio operator. I had written a long QSO of him at the time and put a QSL with all the text in his mailbox. He was so pleased and told me during this visit that in two weeks a course to obtain the license would start in Basel. So, I did the exam in 1985 and was then on air as HB9DDZ. Also, I was immediately allowed to mount an antenna on the house. So, I decided to mount a vertical antenna and a dipole and was QRV on all bands. I joined a radio club in Basel where famous DXers were present (HB9DX and HB9IK). The two OMs taught me straight away that with such antennas not much is possible, and I have to learn CW properly first. That was the starting signal for me to show them that I can’t do it with little and I didn’t have to learn CW anymore. So, it happened that HB9IK called Peter on one evening on 80m CQ. This was my opportunity to avenge me. I gave him an answer and we started a CW QSO. After each pass I increased the tempo. We were about 160Bpm when my phone rang. It was Peter who apologized himself for making the comments about antennae and CW in the past.

That’s how my passion for DX started. I have remained true to my antennas up to today. After 35 years I still have a Vertical and an LW Antenna. I am a great graduate collector and also a member of the DIG. I am also a member of the ARRL, GDXF, USKA and now thanks to you at the CWops. In all the years I have almost only done CW and I are missing only Bouvet and North Korea in CW. Likewise, I own the WAZ on 9 bands only in CW. Only Zone 31 is missing, then everything is complete.

Now I hope that we will have soon connections together and many thanks to you for the great welcome.