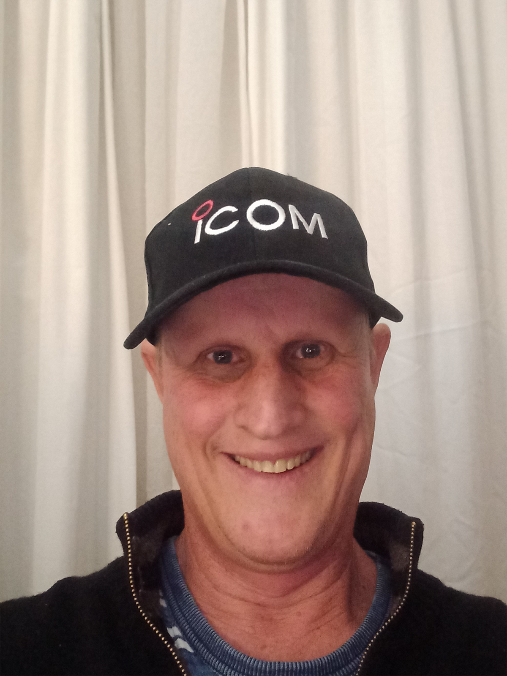 I got my Class A licence in 2014, after much persuasion by Graham ZS6GL. At the time I pulled out due to fear of failure, however Graham and his dad, together with Johan ZS6KY took the road forward, and did their RAE, they all passed. I wrote my RAE about 12 months after ZS6GL. During my over enthusiasm of radio, a call came out to assist Derek Middleton, another ham. I forget his call sign, to erect a tower for his HF beam.

Loving overland camping, I came across SOTA (Summits On The Air) and saw many hams doing phone and CW off mountain tops. It was not long before, I gathered the courage to do my own SOTA in the North West Provence of South Africa. In the meantime, a surge of interested hams, all of a sudden came up on the most used 2m repeater in Africa, namely the ZS6STN 145.700 repeater, located right in the heart of leafy Sandton, on the Bryanston water tower. https://www.zs6stn.org.za/ they were: ZR6GAK Graeme, now ZS1GAK; ZR6KAR Karen; ZS6SR Sean, ZS6DLL now Silent Key; ZS6MAX Max, now in the UK; lastly but not least Matthew ZS6MDV. During our chats on air, I mentioned that I will register on the SOTA website and activate the Magaliesberg Cable Car Summit. https://www.sota.org.uk/ you need special permission to set up a radio there https://summits.sota.org.uk/summit/ZS/NW-041

At this point in time I had made radio friends with Daryl ZS6DLL, and knew later on he loved, and was very passionate about CW Morse code. Well the Saturday, came and we all met at the Cable car base, for a breakfast, feeling very nervous on how this was to pan out, whilst abiding with the SOTA rules of play https://www.youtube.com/watch?v=9NCMXgQ4XZk After a very exciting successful day out, Sean ZS6SR and I discussed how cool it will be to do CW Morse code from upon high… I immediately contacted Daryl ZS6DLL, Sean and I both asked him whether he won’t mind teaching us the code, so we can apply it on future summits. Daryl said YES, no problem. Little did I know at this point in time, that I will battle and struggle through the maze of the unknown. We then as a group decided how to tackle this, and decided to use Hangouts, on which Daryl would play the sounds of the letters to us, and we would type back what we thought we heard being sent. Whilst doing this everyone in the group could see all your faults and successes, very humbling indeed.

We met once a week then twice a week, and were given homework to practice the letters, numbers and punctuation characters. Towards the middle of the lessons Andy ZS6ADY popped in and helped Daryl oversee the proceedings as a guest. I will tell you that I emptied 6 ball point pens writing the letters over and over as I heard them, I’m not exaggerating. The entire course took about six weeks, just to get proficient enough to dare get on air… The last 2 ½ weeks of the course, my peers overtook me, to such an extent, that I felt well out of my depth to continue contributing to the class, I really was the very last in the class, and often felt stupid even to guess what I heard, and publish it live.

Sadly to say ZS6DLL fell ill, and passed away. Sean ZS6SR also had opened a WhatsApp CW group, as well as a Facebook group. The WhatsApp has had a name change since; we have now CW ops in Africa and expanding. All this before I knew about Raoul ZS1C, the CWops coordinators for South Africa.

Unfortunately, due to the demands and pressure of life, a few have dropped out, so myself and a friend who also was in our class, Eric ZS5EL are the only ones still standing. Sean and Graeme did say they are making a comeback, of which I’m very grateful indeed. I will also mention that looking back in hindsight, Daryl was sending character speed letters of about 13 wpm, I very soon found out through research of my own that, if you want to copy faster Morse Code that you are comfortable with, set your character speed of the letters and number, including punctuation at the speed you ultimately want to peak at.

It was about 6 months after the passing of ZS6SDLL, I noticed that Sean and Graeme were learning at least 18 wpm. I did not want to fall behind again and tweaked my key to match their sending speed. Since then, I’m cruising at 20 wpm to 22 wpm; and improving FAST. All depends on your frame of mind, word spacing and various other factors at the time. Mood and relaxation doing Morse code is crucial in my opinion.

I’ve also established moderators / trainers all over the country except for Division 4, (again, all this effort before I even knew about CWops) we are still looking out for a willing Ham. I have three radios which do CW: My Yaesu 857d in a go box, you can see the Go Box here https://www.youtube.com/watch?v=vUjl9xHYqJs&t=209s I also have an Icom 7100 which is used as a base in the QTH, lastly I wanted to get a trail CW radio, and bought second-hand the QCX QRP CW only 5 watt radio, which I love to bits.