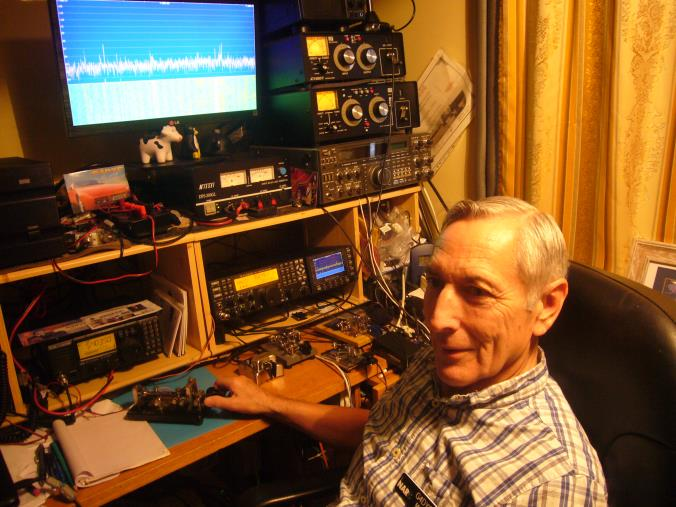 I have had an active interest in amateur radio for over half a century now and am still very keen on various aspects. I was licenced as G4DYC in 1975 but prior to that I was an SWL for 15 years and in fact took and passed my 12 wpm Morse test at the British Post Office (the responsible body in those days) around 10 years before I sat the licence exam. Other professional exams had taken priority. So I “could“ have been a G3 licecee.

As an SWL using a transistor superhet and One valve(tube) receivers I listened to CW from Gus W1BB (SK) on top band and have his QSL card to confirm reception. I was always keen to hear DX but was also thrilled to hear any interesting stations.

I had joined our local club, Norfolk Amateur Radio Club (NARC) as one of the founder members of the present club in 1962 and served at various times as Asst Secretary, Programme Secretary, Hon Secretary and one year as Hon Chairman. Also, in 1962, I joined the RSGB as an SWL member, initially as A3299 and later as BRS30371. So I have been a continuous member of both organisations since that time.

I had some good Morse mentors/tutors at the club including Roger G3LDI, Pat Gowen, G3IOR, SK and Malcolm G3PDH amongst many others including WW2 RAF telegraphists and a WW1 Naval telegraphist. I still own the latter’s Morse key, gifted to me, made by the Chicago Mftng Co. with the patent date of 1896. I also own and am practising using a Vibroplex mechanical Bug key which is over 100 years old…so older than me! Amongst my small collection of keys are some straight keys, an Eddystone mechanical bug key (as used by many British NFD stations prior to el bugs), a Vibroplex single lever paddle, Vibroplex Iambic paddle and an Italian Sculpture key. “Fun” to try them all out in turn…

Some years back I used to be fortunate to attend weekly Morse tuition classes given by local amateurs including G3LDI and G4RCI (SK), who was an ex RAF telegraphist. I also gained some Morse proficiency receiving certificates from the RNARS, Royal Navy Amateur Radio Society. Many years later I am still striving to improve!

My yard/back garden space is fairly small for aerials (30 feet X 50 feet) but I have a 30-foot telescopic mini tower/pole arrangement which supports a W5GI type dipole as an inverted vee together with a 30m/17m inverted vee. The ends drop down steeply at a poor angle for DX but even so they have given me 309 DXCC (current) all confirmed by QSL cards with the ARRL; plus 8 band DXCC and ARRL QRP DXCC. Also, ARRL WAS. Some of the DXCC entities have taken some effort to work! There is an indoor, fixed, HB9CV for 6 meters. I have had several misses of new entities as well. But the challenge is on-going despite band conditions, increasing local noise problems and QTH restrictions. But hey, there are amateurs who have more restrictive QTHs than me.

Other radio interests include Vintage gear and I own a Drake R4C/TX4C, a Collins KWM2, KWM2-A, an early model of “S” Line and a British KW Vanguard AM/CW TX amongst others. There are also several models of Eddystone ( British) RXs and a BC348. All working. The KWM-2A was used by a US disabled (Veteran) (SK) as a Mobile rig fixed to his Wheelchair and his daughter, also licenced, sent me a photo of him using it wheelchair mobile, with a battery to power it and a large whip aerial on the wheelchair. I expect many old rigs have an interesting history if they could speak. I have been a member of VMARS (Vintage Military and Amateur Radio Society) for several years. I also own a couple of ex-services rigs including a Racal, back pack, a CW/AM/SSB transceiver as used in various military campaigns. So, I am interested in radio and general wireless history as well.

Current equipment includes an Elecraft K3 with numerous updates including now the latest synthesiser, used with a P3 and an external display. Also, I use an IC7600 and sometimes a Kenwood TS940 S. There is also an IC706 Mk2 for HF/VHF and an IC703. For /P, I have a venerable Yaesu FT817 and a Chinese X1M, 4-watt TX/RX and a couple of kit built QRP CW rigs. So, plenty of variety to interest me and, perhaps visitors-if they can squeeze into the shack. Most of my major shack equipment was not new so all at least 2nd user. I also have some shack accessories like a Bird wattmeter with various slugs and a Kenwood SM-230 station monitor, etc.

Now retired for a few years but still not enough hours in the day. I did not work in the electronics field but my interest / use of radio has helped me in various aspects of my past career in a number of ways including building confidence, mixing with people from ”all walks of life” from a relatively early age, speaking in public and having a technical/scientific hobby over many years with many challenges including DX and of course CW.

I have been a member of ARRL for a number of years. Also, a member of CDXC, GQRP Club, VMARS, Collins Assn. etc and now a member of CWops- for which I thank my proposer and my Sponsors.

Other interests: (apart from just a little gardening…) are Family, Friends and Porsche cars. For a number of years, I have owned a 1990 Porsche 944 S2, 3 litre model – which is registered as “G4DYC.” It is/was Guards Red for many years-but now has faded and needs a respray.

So, hope I have not bored you. Look forward to meeting you on air and best 73 to existing/prospective members and thanks for having me.