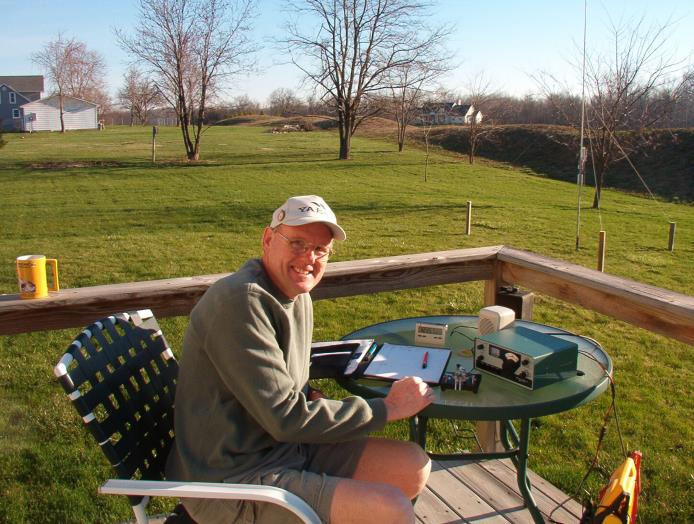 First, let me thank my nominating member Jim AC9EZ and those that saw fit to sponsor me. I’m not exactly sure who they were but I have an idea. THANK YOU!

Much of my ham radio information is documented on my website: wb9dlc.com.

I got into amateur radio via the SWL (shortwave listener) route in the late 60’s. What an interesting time for a SWL – many high-power broadcast stations around the world transmitting their versions of what was going on in the world.

I grew up in South Bend, Indiana about 1 mile from The University of Notre Dame.

I was first licensed in 1970 as WN9DLC and did most of my Novice work with a Globe Scout 680A and a National NC173 Receiver. Those were great times!

After upgrading to General about a year later, I bought a used Heathkit HW-100 from a friend. I had helped him build it a couple of years earlier.

I have typically been very active, except for an 8-year QRT from about 1996 till December of 2003: Sometimes life gets in the way of Ham Radio!! This included running RTTY with a Model 15 Teletype machine and an Electrocom FSC-250 converter made by South Bend native Burt Jaffe – W9BJ (SK).  In 1980 I interfaced a Commodore Pet Computer for RTTY – one of the first computer based RTTY setups.

I operated a lot of packet before the nationwide packet network became somewhat obsoleted by the internet.  Since December 2003, I’m active on HF and 2 meters again and having a blast.  At the present time I operate mostly CW at both QRO and QRP levels.  I also operate some FT-8 and PSK31 and occasionally some SSB.

For a period of time I was operating a lot with vintage gear and had a good time with that.  I have a small collection of vintage gear, but I need to pass it on to others who can enjoy it.

I am having fun with some QRP activities. The most fun is to operate portable in a park, or even just out on my deck during the summer.

The current main rig is a Ten-Tec Omni VII.  A great CW rig.  It’s getting a little old, now.  I have started thinking about what the next rig might be.

Another main hobby is amateur astronomy. I have a Celestron Nexstar 8i computer-controlled telescope. My telescope setup is fairly portable, and I enjoy taking it to truly dark sites.  I enjoy visual astronomy (looking through the eyepiece and locating and enjoying the wonders in the sky). Part of my website (wb9dlc.com) is dedicated to my astronomy hobby.

I am excited to participate in CWops activities. I am now proudly CWOPS Member #2402.