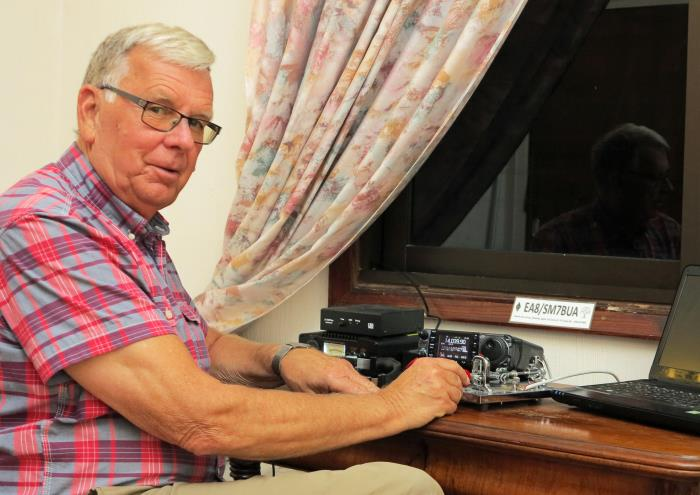 First of all, thank You for the possibility to join this excellent cw-group. Just now I am operating from Puerto de la Cruz, Tenerife as EA8/SM7BUA, and I will go back to Sweden in the beginning of April. My home QTH is Bankeryd on the west coast of lake Vättern.

My interest started early as a young kid with DXing, and my favorite station was radio HCJB, Quito Ecuador, home of the Quad-antenna. During listening on an old BC receiver I found radio amateurs on 40 meter AM, and that gave me a new interest to learn Morse-code. Without a key and oscillator I used the piano, and by help of my dear mom, I learned the letters one by one plying one tone on the piano.

After some years I got to know how to use a Morse-key and also got my license in 1960 with the callsign SM7BUA.

After high school, I studied 3 years to get an exam as radio and TV-serviceman, but very soon I quit that work to attend a training as Christian youth leader in my denomination, Swedish Covenant Mission Church, and since that time I have been working fulltime in churchwork. During some years I was not too active as a Ham operator, but in early 1970 I begun to use my radio equipment again, and still it is an important part of my life.

As member of the NOMIRA-group (Nordic Mission Radio Amateurs) I made contact with missionaries in Africa and South-America. 1980 I went to Ecuador with my family, my wife Britt-Marie and two daughters, to work in the Nordic Department at radio HCJB, Quito as program producer for Swedish program on shortwave. The same station I listen to in early 1950. During 11 years we lived in Ecuador, and I was very active as HC1SK and also HC7SK during these years. I also made a DXpediton to HC8, assisted by my two girls to put up my dipoles. A great experience with CW pile-ups on different bands. I have been back twice in Ecuador together with a group of Swedish DXers for CQWWDX Contest. Our callsign was HD2M, a very special experience!

During the years I have been using Ham radio as a very important tool of communication during many situations. Earthquake in Ecuador, Transport with Aid for children in Romania, and radio communication in Africa.

As a scout leader I have worked as operator on many large Scout Jamborees, the last one was the from SJ22S “22nd World Scout Jamboree Sweden 2011.” I was also in charge of the Morse code training program for the scouts.

Some years ago we started a Morse code training activity in Sweden where a large group met twice a week on 80 meters. We used SSB for voice communication, so I could talk to the students after they had listened to my CW transmission. They had to tell me what had been sent from my station by Morse code. It was a very successful training for many of them who had no local radio club to visit. A special CW-activity, SOCWA (Scandinavian Open CW Activity) started after some months which is still running on the Ham bands.

More info about my years as radio amateur you can read on QRZ.com.