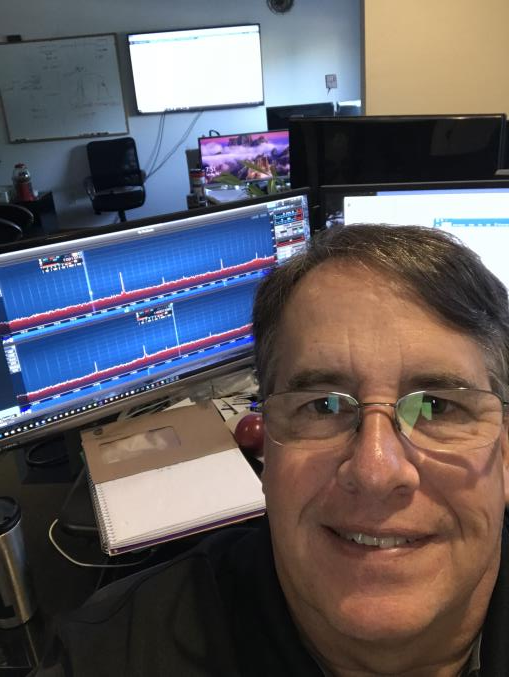 I was initially licensed as a novice around 1972 in Southern California as WN6TNM.  The Ham who tested me also sold me a small 40w crystal-controlled CW transmitter for 40m.  I used my father’s general coverage receiver, I cannot remember the brand, as my receiver.  I think it only received AM.

I had 5 crystals for the 40m novice band.   To operate I had to put in a crystal, connect my transmitter to a 50-ohm dummy load I built, key down and try to tune the receiver still I heard my signal. I had a dipole strung between a tree and our house.  I worked most of California and even managed to get Hawaii once.  But that was about as good as my setup would do.

I think my father wanted to see if this was just some passing fad and when he came into my shop one day and saw me flailing at the radios he said, “Let’s take a ride.”. We headed down to Henry Radio in LA and purchased a Kenwood R-599 receiver and a Hustler vertical.  He helped me mount the vertical on the roof of the house.  This new setup was a dream.

I passed my general and became WB6TNM and built CW and SSB transmitters from the ARRL handbook.  Both worked but continuously needed tweaking to keep them functional.  I had a job by this time debugging Fortran programs for the professors at UCSB.  I saved and did some other odd jobs here and there and my Dad and I took another ride to LA, this time to get the T-599.

When I turned 16 I was driving up the hill by our house and I saw a crane in a driveway lofting a tower section into place.   Curious, I pulled in and introduced myself to the man standing there watching.  He was a brand-new novice, I do not remember his call, but he led me inside to see his station.   He had a full Collins S-line setup including the amp.  I had to ask for a towel to mop up the drool.  A couple weeks later he invited me over and I was simply amazed at the stuff I could hear.  That morning I worked stations in the south pacific, Alaska, Canada and the east coast was easy picking.

Back at my little station I simply could not hear the things he heard.   For this reason, CW was still my favorite mode.  I could do stuff on CW that I simply could not do on SSB.  I did SSB only with my local ham friends late at night.

Life got busy and school came up.  I trained as an electrical engineer but continued to write computer programs for people in my free time.  Then one day an airplane few right overhead and I got the flying bug.

I got a job at the local airport refueling planes and spent every cent I made on flying lessons.  I got my private pilot’s license then continued to get my commercial and CFI, II and ME.  I spent 2 years training students, most of them for their instrument rating or multi-engine rating.  I passed my ATP at age 21, 2 years before I could even be issued the license by law.  For 2 years I carried a letter from the FAA saying I was ATP qualified and would receive the rating on my 23rd birthday.

I was then hired by a Delta regional commuter.  I flew Handley Page Jetstreams, De Havilland Dash7s and Dash8s on regional routes around CA.  I became a captain on my 23rd birthday.   As a Delta employee I enjoyed almost free travel around the world.  It was a fun time to be young and travel.

The regional carrier business is a cutthroat business and our carrier changed owners twice while I was employed by them. One day the axe fell and we were informed the airline was moving to the east coast.  I was not ready to re-locate so I resigned.  I took a job as a corporate pilot for General Dynamics and got to fly a beautiful King Air B-200.  I moved to Seattle in 1980 hoping to find a job with Alaska or some other operation but 1980 was a horrible time in the airline industry and I simply could not find work.

So, I went back to writing software.  I co-founded a company and we focused on writing software for banking.  This went on for about 10 years.  During this time, I was too busy for radio but near the end I got back into it only to find that my license had expired.  I renewed and was issued N7KZG. I took my extra at the FCC with an FCC examiner.  I had to pound out 20 wpm on a straight key.  He grimaced a little at my sending and said, keep practicing.  I thought I had failed but then he handed me my pass notice.

A couple weeks later I was issued WS7M by the FCC.   My friends called me “Washington State 7 Mark” which was kind of cool.  I loved the call on CW but I can be confusing to some people.  I have accidently created mini DX pileups when I was spotted a few times a MS7M.

Since that time I’ve been in and out of Ham radio twice.   I’m back in again with the advent of SDR radios.  As a software guy this is right down my line.  I love being able to write code to control the radios.   But once again I am station/antenna challenged and the best I can do in my HOA is a wire loop.  So, CW remains attractive because I can work long distances I could not on voice with my simple loop.

I now live in Fort Collins and do bio-medical software for a living.  I currently run a Flex-6600 which I love because I can program it and it also works flawlessly remote.  I am doing a lot of remote CW.

I met some local Hams, one who has only been a ham a little over a year who got interested in CW.  Over the last 6 months we’ve held daily CW conversations with practice and pushing our limits. A super nice guy (Eric KK0ECT) who probably is copying code better than I am.   He nominated me for CWOPS which was very cool.

I am looking forward to assisting others to learn CW and hopefully join CWOPS.  Thank you, Eric, for the nomination and I would like to thank my sponsors for their support in becoming a CWOPS member.