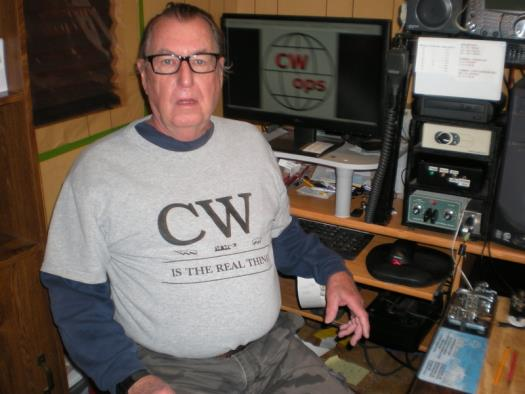 I got my novice license in 1957 at the age of 15 and upgraded to general the next year and escaped the crowded novice band segments and crystal control. I still value the training I received working up to 13 WPM in what was like a DX pileup with a wide-open receiver. The mind is an amazing filter. Still phone was not an option for a poor high school/college kid so I stayed with CW on HF and built a two tube six meter AM rig and could check into a local RACES net. In November 1962 I received a call to report to the courthouse in a neighboring county to do a shift as the state emergency net NCS. I was so occupied with calculus, chemistry and such that I didn’t know that the Cuban Missile Crisis was underway and we were close to war.

Over the years I continued to work mostly DX on CW as the job and family allowed. In 1978 I upgraded to Extra and received my present call.

After retiring in 2000 we moved to Florida and had a small lot and homeowner’s association, so I was only on VHF but joined the newly formed ARES group just in time to be a shelter operator for three hurricanes. In 2011 bought a used HF rig and explored the world of stealth antennas and the digital modes.

In 2014 we moved back to north Alabama and now I have a half acre and no HOA. I use a 43 ft. vertical because my XYL and kids freak out even when I climb ladders. After confirming 200 countries on CW and 150 on digital, I decided to polish up my CW abilities. The fist is not as nimble as it once was so I started working the CWT sessions for practice which led to me writing this.

I have a homebrew interface that allows keying the new TS-2000X with the keyer, straight key, or the computer using the Fldigi QSK tone so I might send a contest exchange with a macro and revert to the keyer for something not programmed or a ragchew. My new hearing aids came with a Bluetooth repeater that can be connected to the rig’s audio and it is better than any headphones because it applies the equalization my ears need.