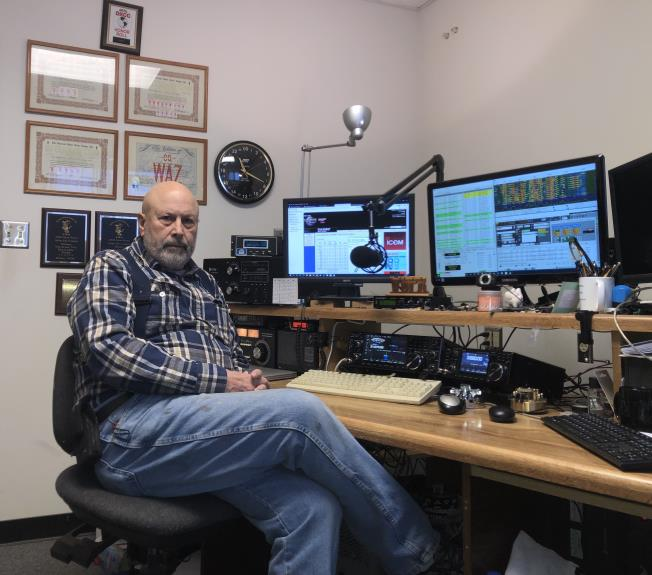 My neighbor across the street was an Army officer stationed at the Presido in San Francisco. He was a ham and had a bunch of military surplus gear in his garage. He invited me to listen and actually let me talk to another station that happened to be in Sioux Ste. Marie, MI. I still remember my first QSO and I was hooked! He offered to help me get my Novice license and we sent away for the stuff from ARRL. Back in the days of snail mail, it took a couple weeks, but by the time the material showed up, he’d been transferred and was GONE! I knew not another ham, so I languished and the fire went out.

Fast forward twenty some years, I had quit my job as a high school teacher and was making some actual money as a truck driver. CB was huge in the late 70’s so I started there. I soon got back interested in amateur radio, picked up a Yaesu FT301D, and installed it in the truck. Pretty soon, thanks to daily W1AW code practice, I was copying CW in my head at 30 wpm and sending with a Bencher strapped to my leg! N0CIB/m was on the air. I finally got licensed in 1980, so I like to say it took me 25 years to learn CW…HI

I got my Extra within the first year or so, and spent the next several years happily running mobile from the 18 wheeler. I quit driving in 1983 and got a job in sales. I began to plan and build my first station from home. I live on a 10 acre hobby farm to this day, and have lots of room for antennas. I put up my first tower, a second (third-fourth) hand Rohn 20 tower and Mosely TA33. My shack was really a shack, a small room I built in the upstairs of an old granary on my little farm. It was cozy but I feared bringing people up the rickety stairs to get there. Needless to say, that was not enough tower. So I soon acquired an 80’ Rohn 45 tower, IIX climbable mast and TH7. That was big step up, and eventually upgraded to a TH-11 and a HyGain Explorer 7-3, three-element Yagi.

I went through many radios and amplifiers over the years, and I upgraded that dusty old shack for a 12×12 heated and air conditioned room, purpose-built for ham radio in a 30×60 pole building (two car garage and woodworking shop) with two separate 220 circuits and four 120 lines. Lots of power for amps and rigs. I’m currently running a new Icom IC7610 and an IC7300. Backed them up with an Alpha 91b and ACOM 1000. I’m active chasing DX, contesting and tinkering. CW is, of course, my favorite mode with 310 confirmed on CW. Too bad the propagation is so poor…and DXpeditions are so few.

In the intervening years I worked in various sales jobs and spent the last 25 years in the financial services industry. First as a life insurance/securities representative, and for the last 15 years of my career as a regional pension plan consultant for several major insurance companies. While on the road I always had a mobile setup running an IC706MkIIG and a HiQ screwdriver antenna and an SGC SG500 solid state amp. I continued my CW mobile experience with hundreds of QSOs, DXCC/m, and county hunting . (I got real popular when I’d get to some rare counties in rural SD or ND from time to time.) Great fun.

My sincere thanks to Hans, K0HB, Scott, K0MD, Bill, W0OR and Fred K4IU for their friendship, support and sponsorship. I will strive to be a worthy ambassador for our favorite mode.