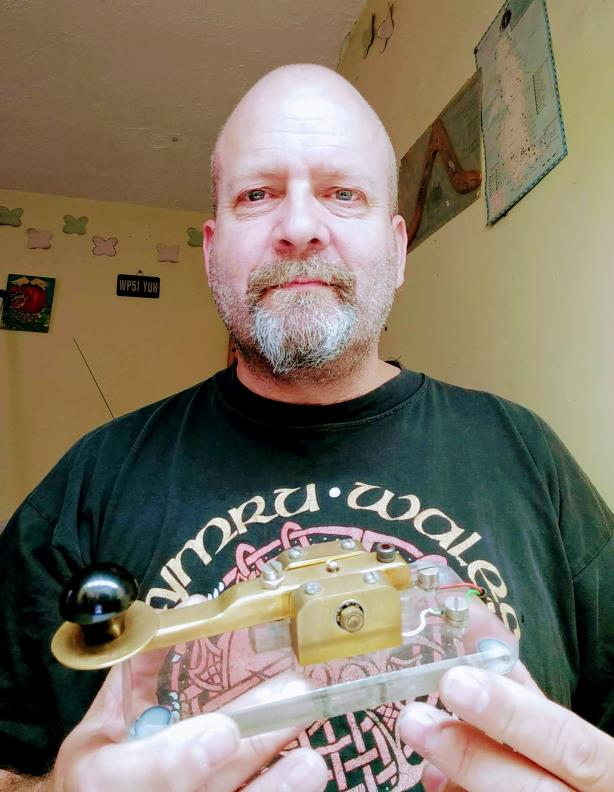 I’m Chris (‘Kit’) from Bristol in the South West of the UK.

I spend my days working as an elevator technician, and when I’m not doing that, I play with radios.

I was always interested in radio, from a very early age. One of my first books was ‘Making a Transistor Radio’ by Rev George Dobbs, G3RJV – it started with constructing a crystal set, gradually adding stages whilst encouraging this young reader to use sharp woodworking tools as well, until a complete radio was finished. Grandad, ever helpful, pointed out that when making a cats-whisker, it’s really handy to have an abandoned lead mine nearby to scavenge that galena crystal from the spoil tips.

I also got into short-wave listening, using radios scavenged from the local dump or scrounged from other sources and tinkered with until they worked. Number stations were always a favourite, and towards the end of the Cold War, there was always something to hear. Of course, all these radios were AM; I didn’t discover SSB until the CB craze arrived and my dad bought one home. The rig we had went up into the bottom end of what I now know to be 10 metres, and I was always baffled by the dits and dahs I heard there.

Float on a few years, we’d moved from the countryside into the urban sprawl, and one day in 1986 Dad suggested we go for our ham tickets. So we found a local club, took the exam, and then the 12wpm Morse test on a home-built straight key (I’m holding it in my picture) to get full licenses. As time went on, I kind of lost interest, having played with all the modes – SSB, RTTY, SSTV, etc, and I lost interest as life and work took over. I sold up and went QRT in April 2001.

Come November 2015, and life had slowed down a bit – and I thought maybe it was time to see what’s happening on the radio. So I bought a Yaesu 817, and put a wire out the window, only to be confronted with S9+ of noise! Of course, in the intervening years the internet and all the cheap, low quality devices people love to plug in had happened. But I could still make out CW signals through it all, so decided to relearn the code. It all came back pretty quickly, but I was nervous of going on the air – sending CQ was fine, but as soon as I tried to decode a reply I just went to pieces!

Fortunately I found the CW Academy, and applied for Level 2 as I was comfortable sending at 12-15wpm. I got a place on the Spring 2018 course, and had a great time with Morse Runner, RufzXP and all the other resources – learning has never been so much fun. It wasn’t like being taught, in the traditional sense; thanks to my advisor Keith G0HKC, it was more like ‘Here’s the tools – now go fix it yourself’.

One of the great things during the course, for me, were the CWT sessions; even with such short contacts, working the same callsign the next week was like meeting an old friend, especially when greeted by name. And then realising, ‘Hey, I copied that in my head’.

I’ve even tried going portable a couple of times for the 1300z session, which is lunchtime here in the UK – using a Xiegu X5105 (the Chinese KX2) – I haven’t had much success in CWT, but did manage a nice ragchew QSO with Keith, who I can’t work from home.

I’m currently battling the lousy band conditions and high noise floor with an Icom IC-7100, a Kent single lever paddle and a home made vertical antenna. I’ve applied to do CWA Level 3 in the new year, and in the meantime I keep sending signals out into the ether in the hope of a QSO.

Thank you to Keith for the nomination and my sponsors for supporting it, I’m proud to be member #2080 and aim to keep paddling – my HF operation is pretty much all CW these days, and I aim to keep it that way; the more I use the code, the more I like it.