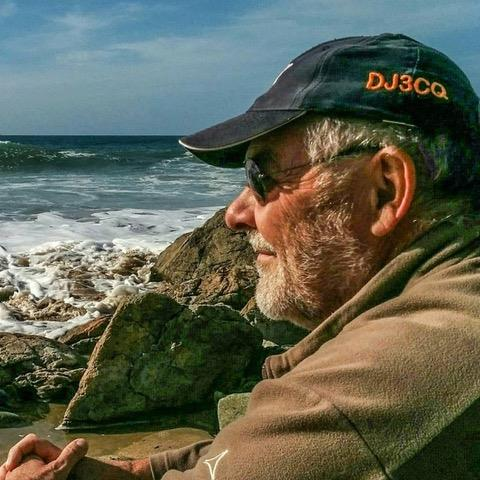 I am honored and thankful to be part of this community now and feel indebted to the old chap who surprisingly nominated me and the quick sponsorships. Thank you guys!

CB-radio had a fast growing community in the late sixties/ early seventies, of course I was part of it. I learned a lot about solar activity, short skip, DX and even about these adorable hams who are communicating with the whole world all day long (of course mostly with their fingertips) and know everything about HF and all these wireless miracles.

I was hooked, instantly searched for an opportunity to get the necessary HAM license and soon found myself in the middle of an evening class among other CBers. The teacher taught us all we needed to know to master the exam and 6 months later I was a proud part of this adorable community holding the callsign DB2CS.

I was limited to VHF/UHF now, not exactly what I wanted in my desire to collect all countries in the world. Time to begin the bigger part of ham education, the main challenge, which was not that easy to master as I heard from others who already failed.

It seems I was not that talented and so it took me nearly a year to get this new language in my head. There were a lot of ups and downs, I even smashed a cassette-recorder in deep frustration but finally my little Junker and I went into a large grey building to prove our CW knowledge and the most thrilling exam in my life ended with a full success. That was in 1977, CW was kind of old fashioned then but I was so impressed that I finally got the code in my head that I decided to store away all my microphones forever.

This commitment is effective up to now: except when on VHF, you wouldn’t find any mic in my shack. I found other things to spend money on: Beside my Junker and my 1st Bencher love, I found lots of keyers, especially these breathtaking beauties from North Italy which gradually found a way into my shack. Every month is time to change the keyer and now at the age of 66 I have plenty to play with. Sometimes I wonder what will happen with all this stuff but that is a different story 😉

I was a member of a few DXpeditions (6V7Z, 7P8D, TY7D) and helped out in numerous contesting teams. At home I’m a DX hunter although my antenna footprint is small due to space limitations. I climbed the DXCC ladder in very little steps, at rung 289 things are not easy for a little pistol but I strongly believe in the next solar cycle.

CW has caught me at the age of 20 and deeply affected my whole life. Due to career, marriage, divorce, etc. I had to quit the hobby several times. I always came back and the simple reason was that I missed the sound of the code so much. CW is a unique language and as native speakers we have to take care of it, to develop it and to find ambassadors taking it carefully to next generations.

Looking forward meeting you on the bands, CW forever!