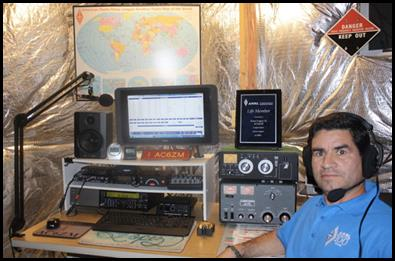 Juan (AC6ZM) was introduced to radio communications as a Field Radio Operator (MOS 2531) in the U.S. Marine Corps when he enlisted in 1981. He served on Active Duty for 27 years and retired in 2008. He mostly operated tactical HF portable and mobile equipment (XXX right) using SSB, CW and RATT (aka RTTY) operating modes which transitioned to HF digital communications in later years with the introduction of computers and Automatic Link Establishment (ALE). He quickly learned to appreciate skywave communications and the challenge it presents to consistent and reliable communications. He also developed an acumen for building field expedient wire HF antennas (e.g. half wave dipole, Inverted L, and AS-2259 NVIS antenna). He was also impressed with the performance of largescale HF wire antennas (e.g. Half Rhombic and Long Wire) especially full wave beverage antennas for low-band signals and large log periodic.

Juan first dabbled in CW back in the late 1980’s operating with reconnaissance units primarily using a J-37 straight key. During this time, he also ventured into Signals Intelligence and Morse Intercept operations. He quickly learned that sending speed is limited using a straight key and he transitioned to an electronic keyer. However, he learned CW using a left-handed keyer even though he is right-handed. So essentially this made him a CW Southpaw (hi hi). This results in using the CW reverse option in most modern rigs and most recently the Winkeyer. In the 1990’s he joined the Palomar Amateur Radio Club in California and was quickly taken under the wing by Dennis Vernacchia (N6KI). He passed the Technician Plus license exam with CW portion in 1994 and was issued the callsign KE6KNN. He was handed a certificate by Gordon West (WB6NOA) for this accomplishment. N6KI introduced him to CW contesting and CT by K1EA for contest logging. He was instantly hooked to CW contesting. His first Single-Op entry was the 1998 HF IARU. He later upgraded to extra and was issued the callsign AC6ZM. Juan has operated while stationed in Okinawa, Japan as 7J6CEC and also as MARS callsign NNN0BUV. He currently travels aboard for work and frequently operates as DL6/AC6ZM, KP4/AC6ZM. Juan is an ARRL Lifetime member and member of the Tennessee Contest Group. He currently has 236 DXCC confirmed with 219 in CW.