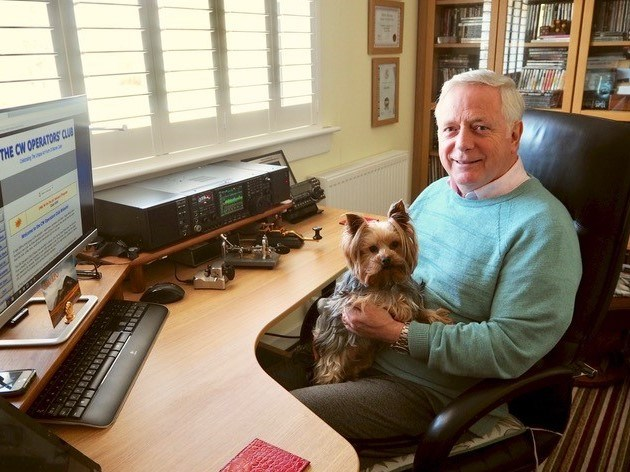 My QTH is in Ayr on the south west coast of Scotland. It’s nice to have a location which only has three letters, hi. Thanks to my sponsors and my level 3 advisor Jerry, AC4BT, I am now CWOPS #1974. It’s an honour to be part of the club.

After passing the Radio Amateurs Exam at Sunderland College in 1976 I was licensed as GM8MRK. In those days you had to pay for a licence which cost me £4.80. I then tried for many years to learn the code using LPs (remember them) played at different speeds to go from 5wpm and eventually reaching 12 wpm, I would not recommend this approach to learning CW. Then I had the good fortune to engage with Jack, GM4RSJ, now SK, as my tutor and guide which enabled me to pass the Morse test at 12wpm. In 1986 and I became GM0EPO. Like many radio amateurs I did not use CW for a long time and totally lost any skill I had previously. In 2013 I decided to start again and learned the code from the beginning, but this time with the help of some very useful tools on the PC and iphone.

By 2017 I was operating regularly on CW and managing to survive at around 20 wpm but I knew I needed help to improve. Last year I came across the CWops website and read about the The Academy. With encouragement from Peter, GM0EUL, I enrolled on the level 3 course which started in January this year. A combination of excellent guidance from Jerry and being involved with a great group of like minded people who wanted to improve was just what I needed to make progress. As a result I graduated from the course in March. I have a long way to go to be as proficient as I would like but the CW Academy has set me on the right direction. My main interest is ragchewing so hope to meet many of you on the air for a long chat. I try to take part in CWTs as often as possible.

My modest station comprises of an IC 756 Pro3 into an end fed half wave antenna. I also have a KX3 which I use for portable operation or when on a campsite in my VW campervan.

I am a member of the Ayr Amateur Radio Group whose website can be found at GM0AYR.ORG. Also a member of Fists, SKCC and GMDX.

I look forward to meeting many CWOPS members on the air.