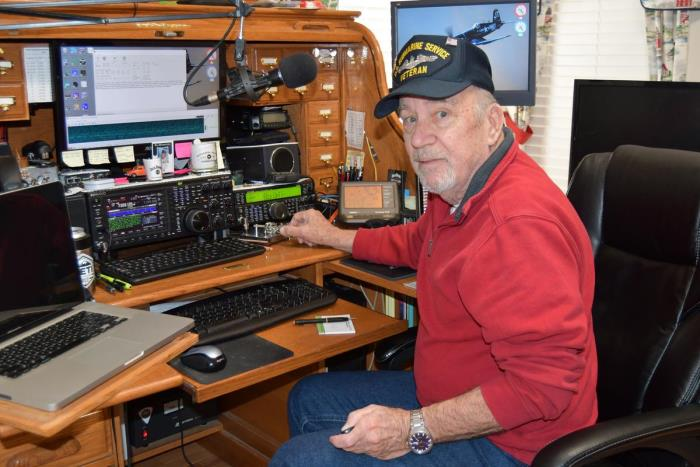 First I would like to thank Jim N7US and those who sponsored me for membership. For me it’s an honor after 58 years in amateur radio to finally get my CW skills up to a decent level, now to keep going.

I have been tinkering with radios since about age 10 but was first licensed on March 1, 1962 as KN3SKB thanks to my Elmer Bill Myers W3DXA now a silent key. Started out with a Hallicrafters S20R Sky Champion and a second hand Heathkit DX-25 tuning for max glow in a neon lamp on the antenna.

Served several enlistments in the US Navy as an Electronic Technician before moving into the civilian world where I have been a communication technician for Los Angeles County, a production test technician and test engineer at Hughes Aircraft Radar Systems, test engineer at General Dynamics and network and operations manager for Crown Castle retiring in 2010.

I was involved in the special temporary authorization for HF packet radio in the 80s, operating an HF BBS as KD6SQ in Rancho Cucamonga, Calaifornia. I have since move coast to coast 3 times and finally settled in Indian Trail, North Carolina, a suburb of Charlotte.

I am a casual contester for CW and RTTY contests, not much for SSB contests.

When I retired, one of my goals was to get back to operating CW and it has been an enjoyable journey but I still have much to improve. It’s also a good way to keep the grey matter in good shape as you age.

I also enjoy the experimenting with small microcomputers such as Raspberry Pi and Arduino and wood carving which I find very relaxing.

Looking forward to working the CWTs as a member.