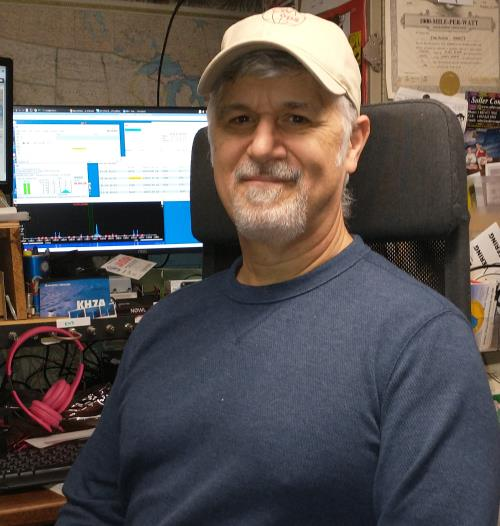 My first rig was a second-hand Kenwood TS-820S (a great rig), purchased from Don KE0FX (SK). My first QSO was on 10 m SSB, with CX4PA Carlos. Pretty soon I worked a local, Corey KB0HOB (now KF0U). He and I became fast friends, and we pushed each other to quickly advance our knowledge, skills and license class. By December we had both passed our Extra exams and the 20 wpm code requirement. Corey also spurred us both to get our General Radiotelephone tickets. The test at that time was based largely on the Extra Class ham radio exam, so why not?

We worked Field Days together, did some SSB contesting, and had a lot of fun working RS-12/13 satellite contacts, 15 m up, 10 m down. I can remember working a late night bird pass in the 90s, twisting the BFO knob on my R-390A to adjust for the Doppler shift, and having folks come back to me simplex on 15 m. Hard to explain in the middle of a fast-paced satellite QSO that you’re not listening on 15 m. Hope those sunspots come back!

I soon fell in with the St. Louis QRP Society — an active group of folks keenly interested in building flea-powered gear, original projects, antenna experimentation and operating. They’re still a great bunch, and I owe a debt of gratitude to Dave NF0R, Keith KC0PP, Jeff N0MII, Matt W0MJ, Walter K5EST, Stan AK0B (SK) and Randy WA0OUI (SK) for encouraging me to experiment, contest at QRP levels, and continuing to learn.

Life presented bigger priorities, and ham radio took a back burner for a while.

In 2019, I decided to give CW Sweepstakes another shot. It had been 10 years since I did any contesting, and 13 since I’d done SS. That was a real eye-opener. I was still using my trusty old TR7, manual tuner, TLF contest software (a great program for Linux) and my 40 m dipole. My CW skills were not what they once were, and clearly my shack set up was not as frequency agile as it could be. So, I set myself a course to improve my skills and my station. First, I changed my call sign from N0OCT to KK0U — shorter, sweeter and sounds good on CW.

Next I bought a KX3. In November of 2020 I started dipping my toe into the weekly CWTs. That was intimidating — I’d have to listen to exchanges 3, 4 or 5 times to get solid copy in my head, and get it all down on paper.

Humbled but undaunted, using the guidance of the CW Academy courses, I set about improving my speed. I went from 11 QSOs in the first CWT hour I reported in November 2020 to 51 by February, all QRP. I quickly upgraded to 100 Watts. By September I hit my first 100 QSOs/10k score, and was having a ball doing it. (I would have gotten there sooner, but there was a 3-month stint QRP as DL/KK0U while my wife and I helped out with our first grandchild).

I have other hobbies that I enjoy apart from ham hadio — sailing, cycling, shooting, sewing gear for all my other hobbies and homebrewing — both beer & radio bits. SOTA is a natural fit, as I enjoy operating outside and hiking. I’m a chemist by training, and have worked at the same small industrial detergent company for over 25 years.

When Dwight KM4FO asked if I’d like to be nominated to join CWops, I jumped at the chance. Thanks to Andy AA5JF, Shelby K4WW, Doug KR2Q, Jim N7US, Bill W0TG and Hank W6SX for sponsoring me. Thanks to all who make CWops happen, who keep the art of CW alive and well, and who encourage hams new and seasoned to give CW a shot.

I also have to thank my wife Jeanne, for being tolerant and even encouraging in all my hobbies. She makes sure that this ham stays ‘balanced.’

Hope to work you on the air!