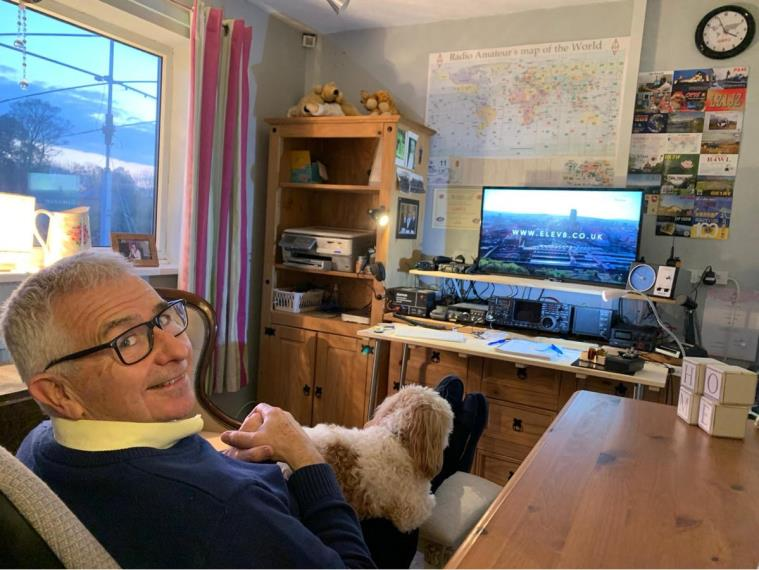 I was born in 1955 and after leaving school joined the family business as a butcher. I always had hobbies and played football and formed a band. It was in 1979 that I formed a band called ‘Pastiche’ and two members of the band were licensed amateurs. Ian (G4FOS) sadly SK, and Mike (G4KQY). As radio was often the topic of conversation, this piqued my interest and I was mentored by G4FOS to go on and obtain a license. As Ian and Mike were both ‘A’ licenses, I didn’t fancy getting a ‘B’ license so they could cheek me!

That meant learning the code! I set about learning with the help of a LP record and an early random Morse generator while also attending night classes for the radio theory and license conditions. I pushed my speed towards 16 wpm in order to take the 12wpm test and got the date through for my test at Mablethorpe on the east coast of England, before I had taken the City and Guilds amateur radio exam.

I remember the 180 mile round trip well especially on the way back after passing the test and feeling really pleased with myself. All I had to do now was pass the exam which I did with honors and subsequently got issued with my ‘A’ license G4PFZ. No chance for my band members to cheek me.

I went on to teach and mentor 6 amateurs, one of which was my son Simon G7WAK. Sadly Simon was lost to a RTA (Road Traffic Accident) in 2011.

During my time in the band, we used to communicate on the way to and from gigs and one of my contacts was Roger Cooke G3LDI, who became a good friend and is highly regarded in this part of the world as a promoter of CW.

After being QRT for many years my interest in Amateur radio was resurrected in 2016. I was told that the local club, Norfolk Amateur Radio Club, met on Wednesday evenings at my old school.

I decided to attend and soon realised how the hobby had changed, with the PC being an integral part of a station. I found programs like Logger 32 and N1MM to be very good and learning how they work is great fun. I got my HF rig from the chairman of the club and was soon drawn into contesting. I told Mike G4KQY, and he also resurrected his interest. We now spur each other on with CW being our main interest. Roger told me about the CWTs and I started taking part. I needed to get my speed up if I wanted to join, and with much encouragement from the strong contingent of CW operators at our club and a new Begali Contour key, I have managed to get there. I must say a big thankyou to Roger G3LDI who nominated me and to all my sponsors. I am really pleased to become a member of CW Ops.

Details of my station can be found on QRZ.com

My other hobbies include golf, dancing and walking our dog ‘Rigby’

The picture shows me in the shack with Rigby and you can see the lowered beam through the window.