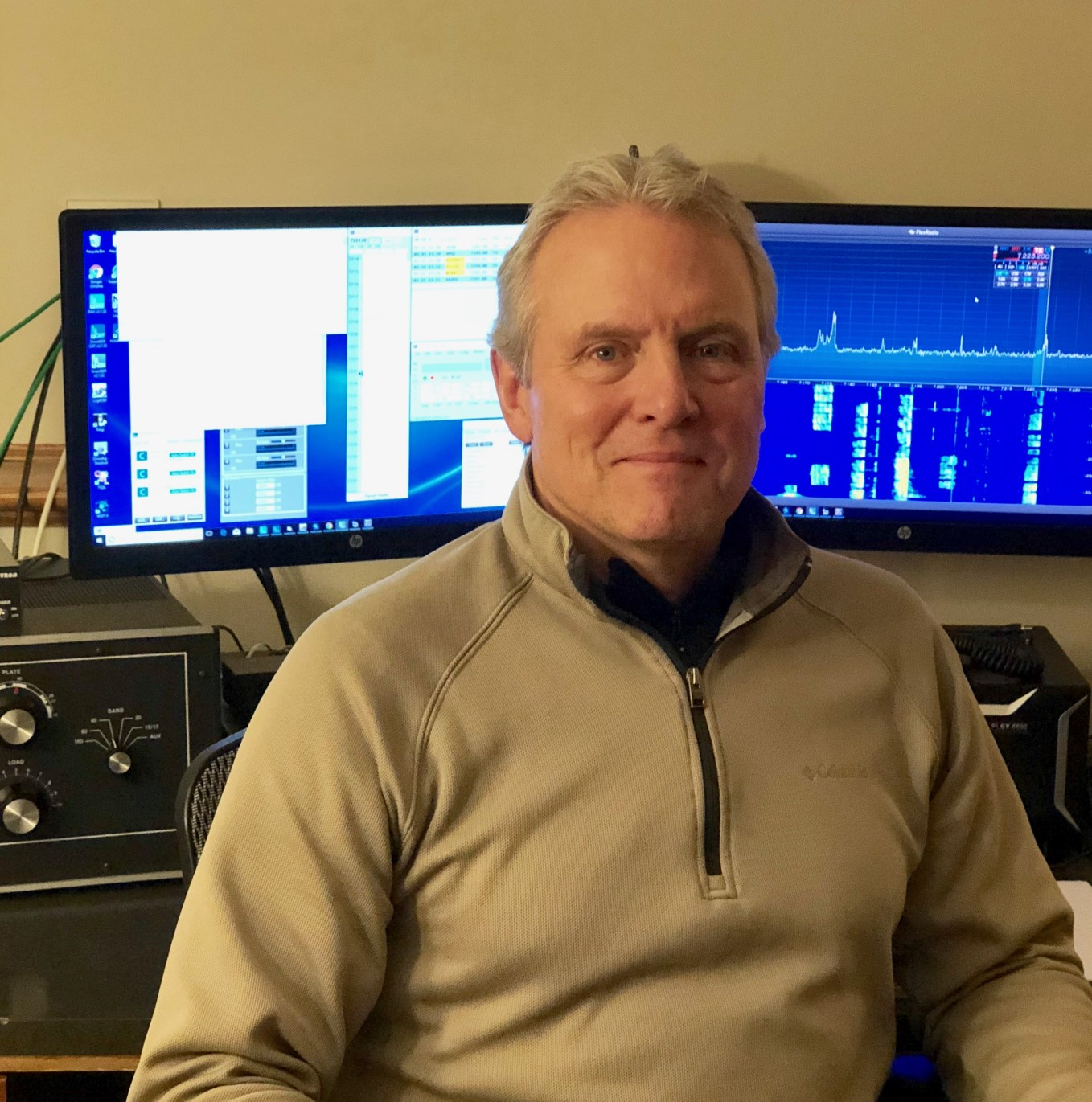 This all started when I received a crystal radio as a Christmas present back when I was in grade school.  Amazingly, I could listen to AM broadcasts in my headphones without any source of power. It was like magic!  Later, an old Scott shortwave receiver kept me busy for hours. Some years later, with the encouragement of my high school buddy Fred, K9VV, it was time to get my (inevitable) ham ticket.  Fred also introduced me to Larry, K9ARZ, who administered my test, and several months later, I received my novice license at the age of 15 in 1975 as WN9QVN. I had already purchased some equipment in anticipation, and Fred came over to help me put up a 40M dipole so I could get on the air.  My first rig was a used Heathkit DX-40, and I was “rock bound” by regulation. At some point the FCC eased the rule and I was able to borrow a VFO and move around the 80, 40, and 15M bands; 20M was off limits to us. The novice license was CW only, and I used a straight key of course. My receiver was an old National NC-183D, which worked pretty well on the lower bands.  I later put up an 80M dipole, and then a homebrew 2-element 15M Yagi on a guyed rooftop mast. I had lots of fun making contacts at 5 wpm and exchanging QSL cards. At some point the FCC changed my call to WB9QVN before it expired. In 1977, I headed off to the University of Illinois, majoring in Mechanical Engineering, and was pretty much off the air.

I graduated in 1981, took a job in Houston Texas, and then married my college sweetheart, Laurie, in 1982.  I also finally got my General license and became N5FIW while living in Houston. A used Drake TR4 was my rig during this time.  We moved back to Illinois in 1983 and I kept that call. However, kids, career, grad school, etc. kind of pushed ham radio aside for many years, and I only operated sporadically until more recently.  Since we became empty nesters, there has been a bit more time available for hobbies, and since 2015, I have been pretty radioactive. I added a Yaesu FTdx1200 in 2015 and could hardly believe the difference between that and the older rigs I had.  I upgraded to Extra in April of 2015, and changed call signs to N9LQ in November of 2015. Since then I have enjoyed contesting, DXing, digital modes and playing a bit with the easy satellites. I’m not exactly sure why, but CW is clearly my favorite mode, and CW contesting my favorite activity.

I enjoy working on my station as well.  I added an AL-1200 amplifier last year which has added another dimension to ham radio for me, and very recently upgraded rigs to a Flex 6600.  I am just starting to figure it out, but hope to be able to start to explore SO2R with it. My antennas are very modest. I have two 40/20 parallel dipoles at 90 degrees to each other for some directionality, and an inverted L for both 160 and 80.  For receiving on 80 and 160, I use a K9AY loop, and 2 short (225’) beverages on the ground (BOGs). I hope to add some directional gain for the higher bands sometime in the not-too-distant future as well.

I have spent most of my career in engineering and manufacturing management positions.  My wife and I are both still working, but at age 58, retirement isn’t that many years away.  We have three wonderful children, aged 30 to 26, who all live in the Chicago area. We are fortunate to be able to spend time with them regularly.  When I’m not working, or playing radio, I keep pretty active. I still play ice hockey once or twice a week, and in the summer am out on my bicycle most weekends.  I enjoy skeet shooting as well and try and get out to do that fairly often. Thanks for having me as a member of the CWops club, and I look forward to seeing you on the air.