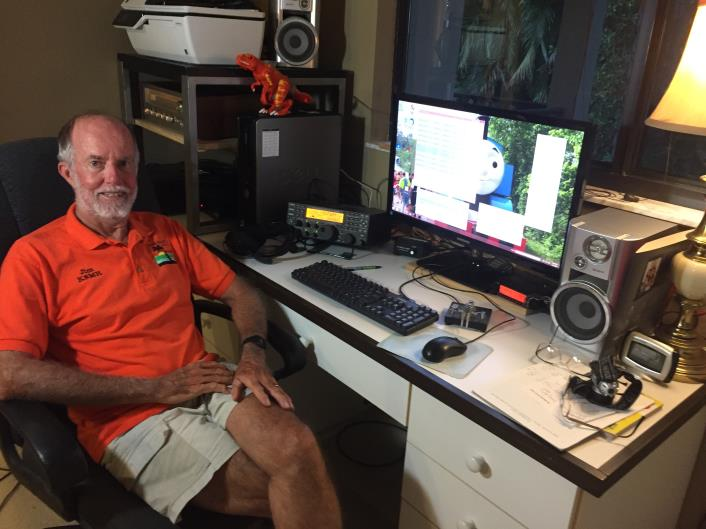 I’ve been doing CW ever since I got my novice license in 1964 as WN3/WA3BGE. In the spring of my senior year in high school, a good friend Glen, WA3BBJ/W3JL (SK) persuaded me to try for the FCC First Class Radiotelephone license, largely so I could drive him to somewhere he could take that test as well (at the time he was too young for a driver’s license). I studied up, and on a Tuesday night he taught me how to drive his parents’ stick shift car, and then on Thursday night I drove the two of us from Sharon, PA, to Detroit to take the test.

I passed, and then got a summer job at a radio/TV station in Youngstown, Ohio. After three summers there, spending summers at home was terminally boring, so I looked around Cleveland where I was going to school at Case Western Reserve University and found a similar summer engineering job at WJW-TV. Thirty-nine years later they paid me a lot of money to go away.

I’m now a Florida snowbird, splitting time between summers in Cleveland and winters in Sarasota. In Ohio I have a decent tri-bander/KW station; in Florida I’m lucky to be able to have a K3 and G5RV at 35 feet or so. Phone contests stink, but I’m having fun doing CW from the Florida condo QTH.

In 1983 my girlfriend and I had planned a vacation trip to Anguilla, including time for me to operate in the ARRL DX CW test as VP2EU. In that contest I took second place in the world behind N6TJ who was operating from Barbados. A month before we left, she told me she was pregnant. So, we upgraded the trip to a honeymoon, and 37 years later we’re still happily married, with two daughters and three grandkids.

I’m past doing long full-time contests seriously, but I enjoy getting into lots of them. My specialty may be as a mobile in various state QSO parties, in particular Ohio (I’m the chairman of the Ohio QSO Party) and Florida, as well as my home state of Pennsylvania when schedules permit. I also enjoy the CW Sweepstakes as a “Single Op Multi Station,” where I visit several other stations, taking advantage of being “fresh meat” to keep up good rates when everybody else is slogging it out. In 2014 I was the W8 team leader at the WRTC in New England, with Mike, K9NW, as my teammate. We finished in the pack, but had a great time doing it.