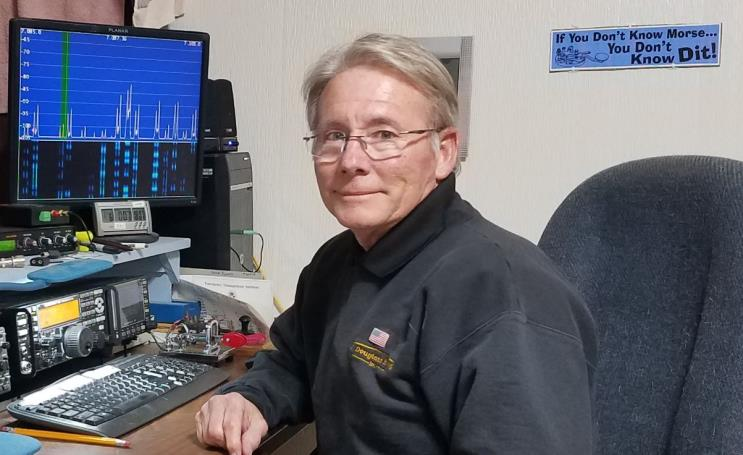 I first got into radio in 1970 when I enlisted in the United States Army.

The only things I did NOT want to be were a clerk, because I couldn’t type, or a radio-operator, because they carried not only their own gear in the field but also the radio. To add fuel to that fire you were up where the officer was who, by default, a primary target of the opposition….

Did I also say I was not a rocket scientist?

The first thing that happened was I got talked into enlisting for an additional year (4 years) but I was joining an elite secret organization called the Army Security Agency!

So off to the Secret ASA Training Base I went, Fort Leonard Wood, MO for basic training. I really wasn’t in the US Army, my recruiter told me. Actually we were a hidden organization that only wore the uniform as a cover to conceal our true identities…….

Then to another Secret ASA Training Base just outside of Boston, MA at a place called Fort Devens (is the reader beginning to see a pattern here?) where I spent the summer of 1970 trying to figure out where all the keys were located on a “Mill” and what were all the funny sounding beeps coming from the headsets I was provided.

I graduated from Basic Morse Code (BMC) School in August of 1970 and thankfully was sent to Radio-teletype Intercept School.

Three, not 4 years (a year drop for good behavior), later I left the United States Army Security Agency and went to Electronics School on the GI Bill.

I opened a small electronics repair shop in 1975 after the post Viet Nam draw down flooded the tech market where I was and the only way to stay busy was open my own shop to keep from losing all I had learned about radio/electronics.

In 1977 I passed my Novice ticket administered by Duke Ellington, W0FDY (SK).

In 1978 I was hired by the City of Boulder, Colorado to work in their radio shop. I replaced another tech who had taken a position in Montana. That guy’s name was Ken Kopp, K0PP.

My supervisor in the radio shop was a guy named Tom Debacher, N0CH (SK)

Our department head, and the guy who hired me, was Robert (Bob) McCaa, K0RZ.

In 1978…. passed my Extra Class exam at the FCC Field Office, (high up in a building in downtown Denver). I immediately filled out a form 610 requesting a 1×2 callsign and mailed it the same day…………… about 30 days later I received two (2) letters from the FCC. The first was my form 610; which in my haste to get my new 1×2 callsign I had failed to add MY SIGNATURE….

The second letter was my newly assigned callsign & license. That callsign was, and is, AC0E.

In 1979 I hired on with Cities Service Gas Company in April of as a Communications Technician. This was due to Guy Baker, N0GB, telling me of the openings on a new 600 mile pipeline project and would include the contruction of a 27-hop microwave system.

In 1983 I hired on with Sunflower Electric Cooperative back in my home town of Garden City, Kansas. This was to build and maintain a 14-hop microwave system to support the generation and transmission of electric power. I was hired by a friend of mine, Rod Hogg, K0EQH.

In 1986 I hired on with Mobil Pipeline Company and worked as a Communications Technician in the Gulf of Mexico.

In 1993 to 2020 came back to work in our family roofing business and have since retired to doing amateur radio and enjoying my children and grandchildren.

Much more to the story but I would have to tap another keg so if you have read this far you will have to wait…..For the rest of the story….