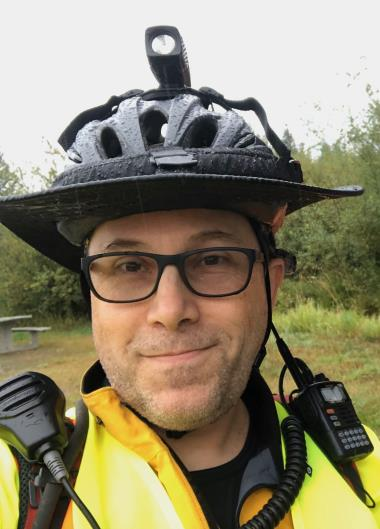 I’m a relative newcomer to ham radio, having earned my license in late 2015. For my first two years, I was primarily on VHF/UHF to support local events for the Eastside Fire Corps.

I picked up an Elecraft KX3 and soon realized I had a lot more to learn about antennas, propagation, and general use of a radio. The antenna proved the most vexing as I’m in an HOA. Fortunately, my neighbors were indifferent to coax running from my deck into the trees abutting a pipeline right-of-way.

About this time, FT8’s first release came out. For a KX3 QRP rig owner in an HOA, FT8 is not just another TLA, it’s an opportunity to get on the air with a limited set-up. I don’t remember how long it took me to get the right settings before making my first QSO… to Venezuela. I was hooked.

Since I am frequently outdoors geocaching, hiking, biking, a friend suggested I explore SOTA (Summits on the Air). From my research, it was nearly universal that CW would be the best path to successful activations. Thank you, Paula K9IR, for the fantastic article in the March 2019 Solid Copy.

I had a few false starts with online CW tools, but made it through a phone application called Morse Toad I played on the bus commute to and from work. At a Redmond Radio Club meeting, I overheard someone mentioning he was participating in CW Academy. I was fortunate to get into Buz’s AC6AC beginner class last January and recently completed the advanced class last month. A big thanks to instructors Buz AC6AC, Rich N4DPM and Mike N7ID; my excellent classmates for making this a fun endeavor and reducing my on-air anxiety.

I am excited about joining CWops and appreciate the overwhelmingly positive encouragement I’ve received as I’ve dabbled in CWT and contests. I look forward to contributing more towards helping CW Academy this year.