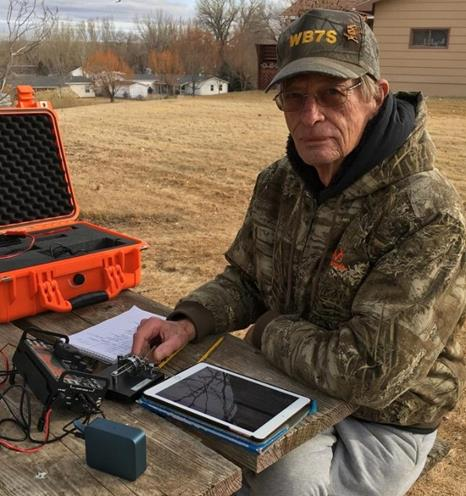 I got my Novice license in 1979 when the Code was still a requirement and I struggled to learn it at 5 wpm counting dits and dahs. I remember the first time I sent CQ. I was afraid someone would answer it, someone did. That first QSO was pretty short!

After passing the Technician exam I finally decided to go for the General Class license which required I pass the 13 wpm code exam. I couldn’t wait to hook a mic up to my rig and get on SSB. I would use CW once in a while but never was very good at it.

I decided to try for my Extra Class License and that required me to pass a 20 wpm code exam. By that time I was fortunate to have a CW Elmer who had been an airborne radio operator in the Air Force. My Elmer ‘s name was Harry and his Call was KZ7V (SK). We lived within three blocks of each other and would get on our radios in the evening transmitting into our dummy loads at very low power and do crossword puzzles over the air for practice. Harry slowly kept increasing his speed. Finally the day came for exams. My youngest son, Charlie, KA7UTV, passed his Novice written and code exams. I was encouraged, by the VE team to take my Extra Class code exam. I knew, in my mind, I was not ready but gave it my best and low and behold I passed it. I missed one word which I could have guessed but didn’t. I handed in my answer sheet to the examiners and told them that they must have used the 13 wpm tape. One of the examiners popped the tape out and handed it to me and it did say 20 wpm on it. I found out after the session that Harry had got me up to 30 wpm. CW was still not my favorite mode but did enter a few CW contests now and then.

Fast forward to about 5 years ago I decided to get serious about CW and became a member of SKCC and used my straight key for the contacts. One day I saw where one could use a bug for SKCC so I got one of my Vibroplex bugs out, cleaned it up and adjusted it to send good dits. I had lost the ability to copy much above 18 wpm so started practicing more to increase my sending and copying speeds. I still felt I needed more help so I happened to find the CWops web site and saw classes were listed there but I was too late to sign up as all of the classes had finished for that year. Another search lead me to the Long Island CW Club so I joined it and found some of the resources I had been looking for. I did eventually sign up for one of the CW Academy Advanced classes but didn’t do as good as I felt I should have because I had not been practicing enough and was kind in over my head.

Almost a year ago I was setup portable at my son’s house in Cheyenne, WY with my KX3 and my home brew magnetic loop antenna. I tuned to the 20m band and heard all of these CW signals. They were calling CQ CWT. I tuned around and found a few stations that I could copy so I entered my first CWT as a QRP portable station. Many stations were sending well above my copy speed and those I had to bypass. I logged my contacts in a small notebook I had with me and was quite surprised I had made 5 CWT contacts running QRP and my magnetic loop. That was the day the bug to practice more at higher speeds bit me and that was the day I really got to liking CW! To this day 99.9% of my contacts are CW. I like CW so much that I bought a Begali Simplex Mono for my birthday!

I have been one of the instructors for LICW and fill in once in a while if one of the instructors needs to take some time off. I prefer to work with those who in the 15 to 20 wpm range and work to get them on the air. I also participated in the CWops giving back program as one of the Friday evening operators before I became a CWops member. It was fun but I finally got burned out.

I have had many hobbies over the years from fly fishing, building and shooting muzzle loading rifles, brain tanning deer and elk hides to do quill work on, building powder horns, Dutch oven cooking and camping but now due to mobility issues I can no longer do them. Ham radio and CW keep me going these days.

My CW goal is to become proficient at speeds from 35 to 40 wpm! A long difficult journey but with practice I will get there!