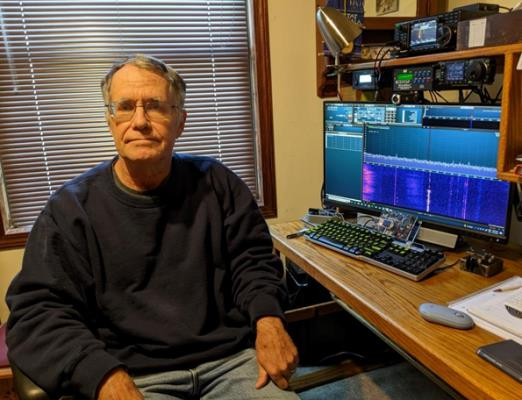 Fairly new ham operator, became licensed in 2018, and it took until 2019 to get a station up and operating. First became interested in CW in Boy Scouts (1960s) and memorizing the dit dahs of the alphabet to earn a merit badge. Not the way to learn CW, but it was always an interest after that. Ham radio interests began when I became a prepper. Not an off the grid, board up the house kind, but just to be ready if things get rough for a short while. That goal, led to my becoming licensed and buying an HT. It was supposed to stop there but didn’t. Soon I was putting up antennas and buying an Icom 7300, and used Icom 7000. There always seems to be something else I would like to add to my shack. An affliction I think we all have.

A ham radio friend mentioned POTA one day, and after looking into it I began activating parks. Great way to get WAS and I soon discovered that there a lot of CW operators hunting parks. I found that they were very patient with my slow CW and many errors. I was able to master the standard POTA QSO quickly, but often got lost if it was a park to park and they were sending numbers. My practice at that point was using apps which helped me to master the code but not very efficiently. That is when I discovered CWops and attended the intermediate and advanced classes this year. My speed has greatly increased and I have to give a shout out to the teachers I had along the way (Buzz AC6AC, Rich N4DPM, Carol K6NF). I also need to give credit to Morse Ninja (Kurt AD0WE) and the developers of the Morserino.

I am a member (presently vice president) of the local ham radio club (Iowa City Amateur Radio Club) and my main task is to organize Field Day.

Prior to ham radio, I worked as a veterinarian for the University of Iowa. I was in private veterinary practice before that, primarily caring for dairy cows in Pennsylvania. Other interests are birdwatching, fishing, pickleball, and working with Habitat for Humanity. I have led 10 teams to Guatemala to build houses. All that stopped with the pandemic but hope to pick it up again in the future.

Thanks to CWops for the training and letting me become a member.