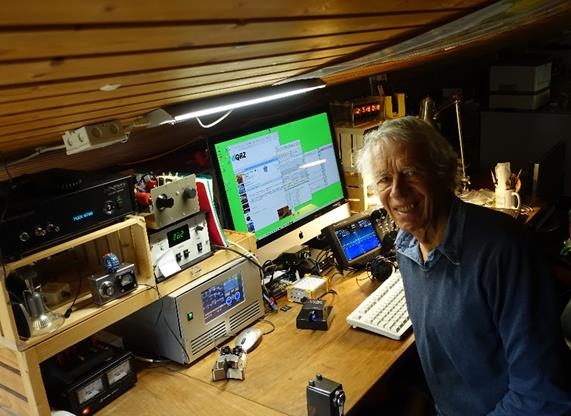 In 1960, when I was 14 years old, I began experimenting with the Kosmos Radiomann. Then I read “SOS at Midnight” by Walker A. Tompkins which definitely hooked me up to ham radio.

I learned the Morse code in the military pre-course. To prepare for the license, which I got in 1967, I read among other things parts of the ARRL Handbook. My first transceiver I ordered in the States: a Heathkit HW-104 which works still today. In the meanwhile I studied Electrical Engineering at ETH Zurich and then worked at Armasuisse in Science and Technology.

With family and career there was a gap in ham radio until late 1980. In 2006 I became a fan of FlexRadios when I had my first SDR, the SDR-1000. After having seen the signals in addition to hearing them I could not be without it anymore. Later I had the Flex-5000, Flex-1500 and at last the SmartSDR Flex-6700.

During the time we had a summerhouse at the west coast of Denmark I was QRY as OZ8AP for many years. In 2012 the HST (High Speed Telegraphy) world championship was held in Beatenberg. For our ​​USKA, Union of Swiss Shortwave Amateurs, I was responsible for public relations. So I was asked to become a member of the Swiss HST team. I joined the team not as a high speeder but as supporter and to improve my CW and so I could attend many championships. I got to know RUFZXP and Morse Runner which I still like to perform daily.

This year I read in the Danish Amateurradio bulletin about CWops and the Academy which offers free courses in CW. I was lucky and could attend the Advanced Class with Buzz AC6AC. Now as member of the CWops I have new friends and will enjoy ragchewing. Apart from the local clubs I am a member of AGCW, FISTS, HTC, EDR and SDXF.