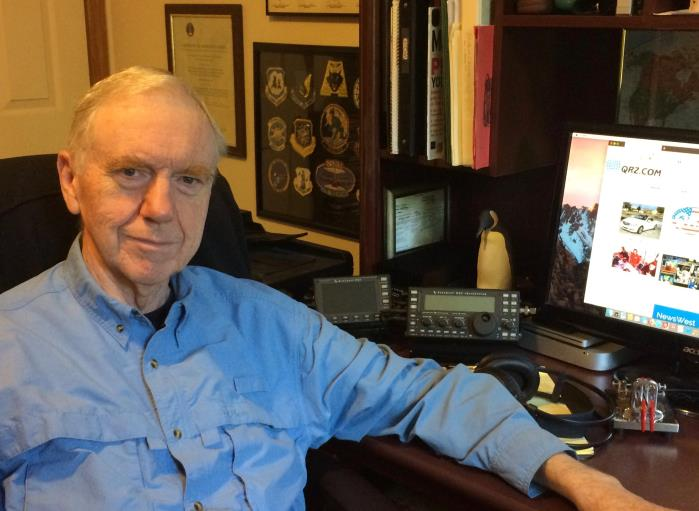 My introduction to CW began long before I knew anything about amateur radio. After high school, my father got his commercial radio operator license, and worked as a radio operator on a merchant ship (then became an accountant – not sure how that happened). He introduced me to CW when I was still in elementary school, but I guess it was too early. Didn’t get my first ham ticket until age 46.

Science was a favorite pastime growing up in Albany, NY. I enjoyed many evenings at Dudley Observatory, observing the heavens through its 12-inch refractor, and attending meetings of the astronomy club in the late 1940s and 50s. Also enjoyed electronics and can remember building a radio when the first transistors were offered for sale sometime in the 50s. But my real passions were geography and airplanes. Spent many hours drawing maps of the world and watching airplanes at Albany airport.

Began my studies at Union College as a physics major. After the first unimpressive year (mediocre math performance), my faculty advisor highly recommended I make science a hobby and do something else to earn a living. Good advice. Joined Air Force ROTC and entered pilot training after graduation. Chose transport planes (C-130) over the more exciting fighters and bombers so I could pursue my dream of traveling to every continent.

Got my first license, KB2EMA, in 1987. A few years later, demands of the job ended my time on the bands. Retired from t

Finally returned to ham radio about two years ago after a break of more than two decades. Rarely used CW after getting the Extra ticket, so I’ve had to invest time in regaining proficiency, as you can well understand. I really enjoy CW, and it’s my only mode now. Having fun, with my KX3, PX3, a 100 watt amp, and a G5RV antenna folded like an accordion in a tiny attic (homeowner association restrictions). Am far more amazed by the ability of a few watts to communicate across oceans, than I was by my many flights (as the pilot) across those same oceans.

Other hobbies include astronomy, and music. I play early European, and traditional American tunes on the mountain dulcimer.

The picture of my station includes a penguin, which reminds me of days working in a colder place. The picture frame in the background holds my father’s commercial radio operators license, issued in 1931, and my Extra ticket at the bottom.

Let me thank two Elmers who took the time to tutor me on CW operating many years ago – John Etter W2ER and Bob McGraw W2LYH of the Southampton radio club. John and Bob had been radio operators at the RCA station on Long Island, sending communications around the world, in the early 20th century. I had hit a CW copy speed wall at about 10 WPM, but after just a few months with these professional operators, I passed the code test for my Extra ticket. Thanks John. Thanks Bob.

And in closing, sincere thanks to those of you who nominated and sponsored me for membership! I feel very fortunate to be a member of the CWops family.